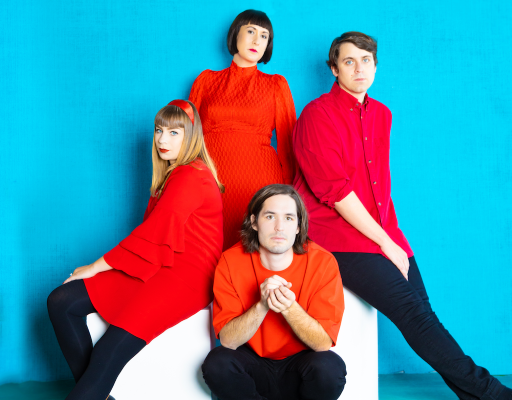 Toronto’s Casper Skulls have shared their new single and video, “Ouija” – this latest track follows on the heels of recent singles tipped by FLOOD, Exclaim, Brooklyn Vegan and more arriving as another installment lifted from their second album, Knows No Kindness which is out today via Next Door Records.

Once again latching onto the band’s new direction of icy folk-inflected rock, taking cues from the likes of Neko Case, and Gillian Welch, the new single “Ouija” peels back those heavier tones previously associated with the band to find a sound that allows singer, Melanie St-Pierre’s lyrics to shine through. Expansive, dreamlike notions are still at play here with guitarist, Neil Bednis finding something more lyrical in his playing drawing inspiration from George Harrison and Neil Young. “Ouija” was the last song written for the forthcoming album marking the only track that they recorded live off the floor; it features spells of pedal steel provided by Aaron Goldstein that help to further accentuate this new approach to writing.

Knows No Kindness is a deeply personal body of work for the band, in particular St-Pierre who tells stories of her life growing up in small-town Northern Ontario, specifically Sudbury and Massey. This new song arrives as a tribute to her grandmother, Velma Crabs who’s death impacted Melanie for a long time. Similar to St-Pierre, Crabs was an artist and musician and moved to Toronto to pursue a career in these industries before moving to Newfoundland to join the Air Force where she would meet her partner, eventually moving to Massey. This new song remembers her life and teachings.

Speaking about the track, Melanie says:

“When she passed away I was 15. One of the last things she said to me in the hospital was that she could see deer in a field in front of her. She was hallucinating but was describing real-life scenes from Massey that she had captured in her oil paintings: the deer, forestry or rushing water from The Chutes Provincial Park.

“After she passed, I dug into her life story and unearthed the photo that’s now the KNK album cover. Alongside the townspeople of Massey, she held a protest to stop AECL from dumping nuclear waste into the Sables and Spanish rivers. “Ouija” is about wanting to talk to her again now as an adult pursuing the same path she left behind.”

Knows No Kindness follows on from the band’s 2016 EP, Lips and Skull, and their 2017 debut full-length, Mercy Works. In 2018, Casper Skulls earned a SOCAN Songwriting Prize nomination for “Lingua Franca” before they independently released a new single/video, “O My Enemy,” a fitting transition between Mercy Works and this forthcoming release.