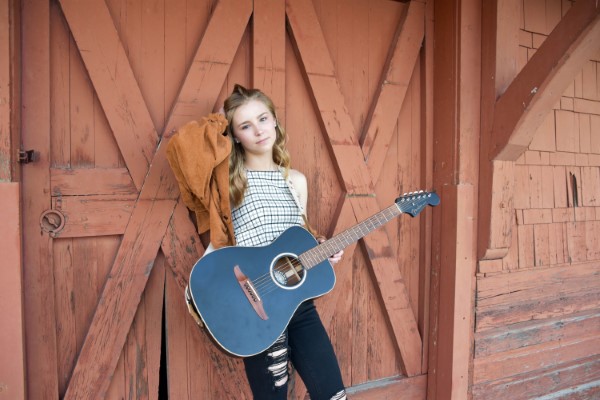 Justine has accomplished a lot in a short time. Winning a trip to Nashville on Global Country Canada star search, she also won 1st in songwriting and 2nd in performance while in the country music capital. Her debut EP Ground Breakingspent the first three days on the top country albums in Canada on iTunes!

Find out more about Justine via our Five Questions With segment below.

My name is Justine Sletten and I’m a singer/songwriter from a small town in southwest Saskatchewan. I have been singing and writing seriously since I was 14 years old, and I released my debut EP entitles Groundbreaking in 2017 when I was 16. Since then I have spent my time playing at different venues across western Canada, and have released 3 singles in the last year and a half! My latest single Longer Road came out in September and personally, I think this song is one of my best!

I call my music country/pop and my biggest influencers would be Shania Twain, Taylor Swift, and Tenille Arts! The last couple of singles that I have released haven’t been ones I have written myself, but my EP is all originals! I love to write about heartbreak and I find it’s something really easy to write about even though I haven’t experienced a lot of it!

I have used this downtime during the pandemic to really focus on working my performance skills. It has definitely been hard to stay creative and during the first part of the pandemic I couldn’t find the motivation to do anything. I realized quickly that this time was valuable and I needed to use it to further all my skills that are used when it comes to music in general!

If I would suggest one song of mine to listen to it would be my newest single Longer Road! I definitely think it’s some of my strongest work and really showcases what I can do! I had so much fun recording this one and I have received so much positive feedback!

Currently, my favourite Canadian artist is Tenille Arts! I think she is such an amazing role model for all of us Saskatchewan artists. She’s doing so many amazing things and just watching her journey and all of her accomplishments makes me so proud to say we are from the same province! I feel like it definitely gives the rest of the Saskatchewan artists hope that anything is possible with some hard work!