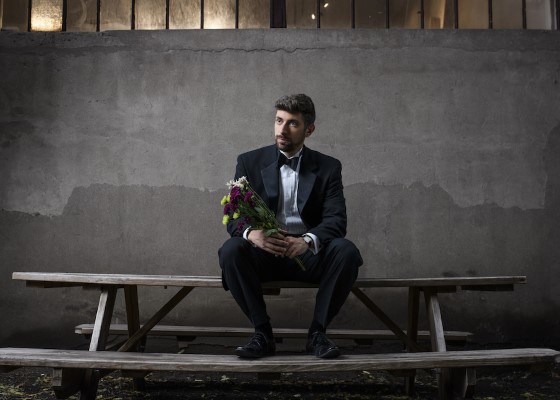 Burned-out mathematician turned indie-soul artist, Jeremy Voltz has released his new single, “Fall Apart”. His music is inspired by thinking deeply about the people in his life and what he’d love to have the courage to say to them.

The single is from Jeremy’s his full-length album, Weekender, which was produced by multiple JUNO Awards winner Michael Phillip Wojewoda, and is a heartfelt ‘thank you’ to his band with “Fall Apart” serving as an apology to his wife for the moments he feels lost internally.

“I hope this album takes away a little bit of the loneliness we all feel,” shares Voltz.

Check out the video for “Fall Apart” below, and find out more about Jeremy via our Five Questions With segment.

Hi everyone! I’m indie-soul artist Jeremy Voltz from Toronto. Five years ago I was a mathematician, I got really burned out, and I switched completely to making music after getting my Ph.D. I’ve been singing since I was a kid, and I was really influenced by Stevie Wonder and Jeff Buckley. I usually write songs that are conversations to the people in my life I’m too scared to have for real. My songs have been featured in movies and television and featured on Spotify’s Discover Weekly, and it’s been a heck of a ride so far.

I do indie-soul and folk primarily, but my ear has been influenced a bit by jazz. The bridges of my songs often go a little crazy, haha. I also sing in Countermeasure, a 13-voice jazz a cappella group, so I’ve gotten really used to incorporating interesting harmony and vocal stacks into my music. But at the same time, I’m a lyrically forward writer. I want the music to support the lyrics. My songs are usually written about the important people in my life and the things I wish I could say to them. That honesty and direct communication seems to resonate with fans. I’d say my music is somewhere in the realm of Cat Stevens, Allen Stone, Hozier, Amos Lee, and John Mayer.

I got through the pandemic by overworking. I worked on two albums and produced a ton of music, and when I couldn’t sleep at night I taught myself 3D design as a different creative outlet. I also read so many books I can’t keep them straight. I found it hard to write new songs during the pandemic, because so much of my music is based on relationships, social interactions, and *doing* things. So it gave me an opportunity to edit and produce songs I had already written.

I’d suggest One Day at a Time. It’s a short little acoustic folk song written to a friend going through a hard time, and I’ve been completely blown away by its reception. It’s helped a lot of people get through some really hard times, and fans write to me regularly about how it got them through health problems, breakups, deaths, all sorts of things. There’s been a lot of healthcare workers during Covid that told me it’s the only way they can get through their shifts, which has been so humbling during all of this. Last year I realized I wanted to create an illustrated lyric book for the song, so people could have it in their homes and be able to read through the words, so I teamed up with visual artist Julia Louise Pereira and we created a beautiful 32 page book, which I’m really proud of.

I’ve been so lucky to be able to collaborate with amazing Canadian talents. My co-writers on Weekender include Kubla, an awesome neo-soul artist from Toronto, R&B producer Beatchild, and Darryl James (Close Kicks) of The Strumbellas. Other favourite Canadian artists are Mattie Leon, Charlotte Cardin, Donovan Woods, Daniel Caesar, J.P Saxe, Oliver Charles, Chris and Nicole, Lydia Persaud… I could go on forever.