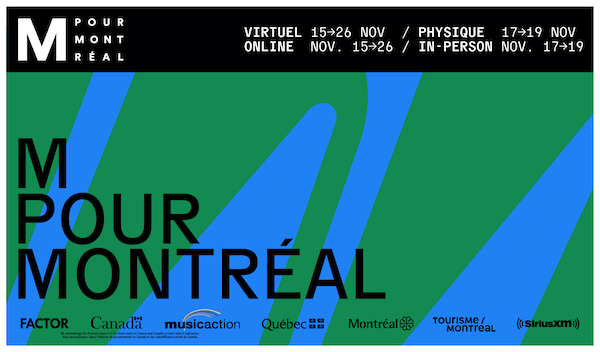 Music industry professionals from Quebec and elsewhere will be able to attend an unprecedented offer with this 16th edition of M for Montreal, which will be held virtually from November 15 to 26, and in-person from November 17 to 19. Earlier this week, the festival unveiled its full lineup of panels and shows!

A dozen panels, technological presentations and workshops will be held in-person from November 17 to 20, at the Phi Centre, Place des Arts, Club Soda, Le Ministère and La Société des Arts Technologiques, where M will be based. Held under three banners, WTF for What’s the Future, Music & Technology, and Empowering Independence, the discussions will focus on answering the questions of an industry that has been badly bruised by the global health crisis and transformed by recent social, economic, and environmental upheaval.

In addition, in order to promote exchanges, the M for Mixer networking sessions will return, as will The Supervision Department, an event that brings together some of the most important international music supervisors. More than 60 professionals from 10 countries outside of Canada will participate in M for Montreal thanks to the contribution of the co-programming partners of the professional component of M: Marauder (USA), Erased Tapes (UK), Factory 92 (Germany) and Ensemble Concerts (Europe).

The staged performances of Backxwash, Bleu Nuit, Choses Sauvages, Nate Husser, Pure Carrière, Skiifall, SLM et Yoo Doo Right will be screened as part of the signature audio-visual showcase The Mothership, produced in collaboration with Parce Que Films and Pestacle. Also added to this list is the Korean band Drunken Boys And Girls Choir part of the International Selection thanks to Kocca’s involvement.

M for Montreal is also unveiling a brand new festival offering under the M for Marathon banner, presented by SiriusXM. Montreal music fans will be treated to a jam-packed pop, rock and hip-hop program.
On November 17th at the SAT, the general public will be able to attend the showcases of four of the hottest local artists of the moment: Robert Robert, Sophia Bel, Laurence-Anne and Hologramme.

On November 19th at Club Soda, an evening presented by SiriusXM, Joy Ride Records and M for Montreal, in collaboration with Rhum Rosemont, will be held, featuring Joy Ride Records artists and already promising to be one of the musical events of the year, since it will gather on stage the collective 5Sang14, 20some, D4vid Lee, Connaisseur Ticaso, Cruzito, Imposs, JordyBoy, Karma, Loud, Lova, MikeZup, Ragers, Randy, Rymz, Shash’U, Tai, White-B et YNG LGNDZ.

Happening at La SAT on the same night, Naya Ali will bring to life her second album Godspeed: Elevated in an evening presented by Santa Teresa. Manitoba’s Jaywood (Captured Tracks) and Vancouver’s R&B sensation Mauvey will be opening the night.

The full lineup available for the public and tickets are now available at mformontreal.com.

mariegoestoshows.wixsite.com/mariegoestoshows
Related ItemsChloé Legrand RPConferencesFestivalLineupM For MontrealmontrealQuebecShowcases
← Previous Story And … here’s Round Two … the second round of performers have been announced for the 2021 CCMA Awards Show
Next Story → Long Winter announces festival & music conference at the end of the month!