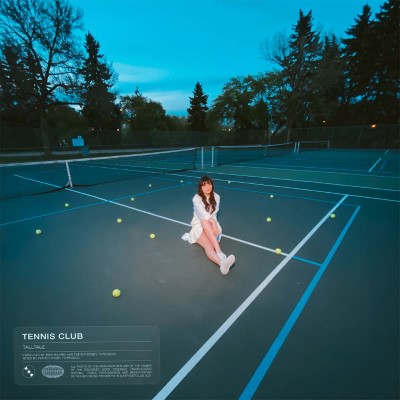 Canadian electronica artist Talltale is bringing a lighthearted approach to a breakup song with the release of her latest single “Tennis Club”.

As an independent artist, Talltale has earned over 300 thousand streams and nabbed numerous awards including the Canadian Songwriting Competition’s 2018 Best Electronic Song, EMA’s Artist to Watch, and a Western Canadian Music Award nomination for Electonic/Dance Artist of the Year.

From writing for J-pop and K-pop artists to releasing acclaimed solo music, Talltale is one of Canada’s rising acts. We caught up with her to learn about her creative process, being vulnerable in music, and what’s next in 2022.

As you started to develop your own sound, what drew you to the electronica/pop sound?

The first electronic/pop album I ever really heard was Owl City’s “Ocean Eyes”. I heard a bonus track off the album in someone’s car when I was like 15 – I think before Fireflies popped off – and my world was forever changed! Haha after years of being a pop/rock lover, I was just so completely awe of the little world he had created in this record, lyrically and sonically. I realized that with electronic music, since you’re creating and shaping every sound in the track, you’re creating the entire world that your music lives in. I think that can be a really transportive experience, it’s still so exciting to me to think about.

When it comes to the writing process, how does the experience writing for other artists compare to writing your own material?

I love both so much because they really feel like two halves of a songwriting whole to me. Writing for other people is all about helping them communicate their vision as best as you can, and it’s such a cool way to write topics and lyrics and melodies that you wouldn’t do for your own artist project. I love so many kinds of music, and it’s great to have an outlet to write in different styles. But I find if I do a ton of writes for other artists, I eventually feel the need to work on a track for myself – when you’re working on your own project, you don’t have to compromise since it’s your vision at the forefront, and I think that’s really refreshing after working to service other folks’ ideas.

Did you have to adapt when it came to creating music in the pandemic? Were there any creative challenges you faced?

Absolutely! Normally I’ll make songs in the studio with my producer Father Bobby Townsend, but when the pandemic happened I had to do things a little differently! I ended up making a full EP that I released last November, called “sugar”, and for that EP we would pass production files back and forth across the country while I would write all the lyrics and melodies and then track the vocals in my bedroom. While I missed the energy of being in the studio, it was a really cool way to do a record! And I think a lot of musicians are way more open to writing with people online now that we figured out systems to do it over the last year and a half.

Let’s talk about Tennis Club, which is a great track. What made you decide to take your breakup experience and lend that lightheartedness and cheekiness to the single, rather than a more somber, emotional song?

Well, thanks for the compliment! I feel like I’ve gotten sadder as I’ve gotten older, like I’m quite a pessimistic person haha, so I don’t spend very much time-consuming media that’s super sad. Whether it’s music, TV shows, or movies, I love stuff that can touch on sad or serious subject matter while not dragging you down emotionally when you consume it. I really love sad songs that are bubbly and fun to listen to, because it can just be enjoyed musically, or you can choose to interact with it more deeply and really get in your feelings. I think “It’s Not Living if it’s Not With You” by The 1975 is brilliant in that way! It’s such a fun song that people sing and dance to, but it’s about drug addiction. I think it can make music meaningful for more people in more ways.

Did you work with any other writers on this single or is it 100% Talltale?

Some songs are great to do as an insular thing, but this was definitely one that benefitted from having a few people work on it! Mike Bilenki and I wrote all the lyrics, Laurel Clouston (artist name Laur Elle) wrote the melodies with me, and then Mike and my regular producer, Father Bobby Townsend, did the production with me! For a song like this, I really wanted to make sure it was fun without going too cheesy, so it was crucial to have other people as sounding boards to make sure it was just right, and these folks are – in my opinion – some of the best talent in Canada. I’m so lucky to have worked with them!

Have you always been as open of songwriter when it comes to talking about your experience in love? Is there any hesitation to put those feelings out for your fans to hear?

I’ve always been super open, but maybe it’s because I’ve only ever had bad luck with love! Haha, I’ve been single for years, so all my songs about love stem from really intense feelings for guys that don’t work out. I’m not a very private person, so it’s never crossed my mind to hesitate sharing what I think or how I feel. It kind of feels like sharing my side of the story, which gives me a sort of closure!

Since we’re coming to the end of 2021, what does the next year look like for your music?

I’m really excited about next year! I just got back from a month of writing in LA, and I’m moving to Toronto the day Tennis Club comes out, where I’ve got a home studio in my apartment. I’m so excited to have my own studio space to work in, and it’ll definitely mean another album early next year!