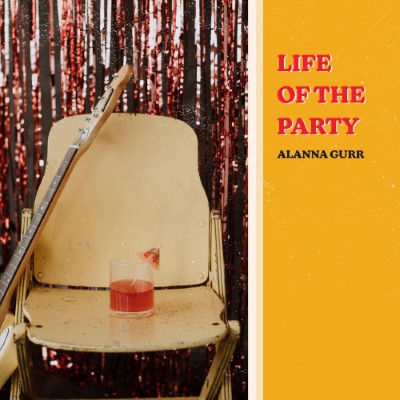 On her new album Life of the Party, Guelph singer Alanna Gurr is a vessel of intrinsic melody. In addition to the clean/acoustic/steel guitar and atmospheric rhythm section that build much of the ground for these songs, as well as occasional accoutrement including organ, the artist’s voice is like an instrument itself.

Hers is an ethereal style of singing that isn’t easy to compare with others in contemporary music (off the top of my head, I can think of maybe Logan Thackray from Logan & Nathan and The Honey Tongues). That ability perhaps stands out most in the chorus of “Bad Habits” or the entirety of “In Gold,” while during “Not on You,” the background vocals take on a more subtle but especially enticing wispiness. As for lyrics, a definite highlight would be the title track, for its inventive juxtaposition of extraverted behaviour in the context of solitude. And that is only the beginning of such adroitly sentimental words on this release, like when she sings of being a “golden mess” in “The Air Around Me,” or questions “Can’t you let a woman just figure it out?” during “In the Headlights.”

All in all, Alanna Gurr has a great way of saying things when it comes to content as well as manner. If the tenderest breeze could vocalize, it might sound something similar to this.