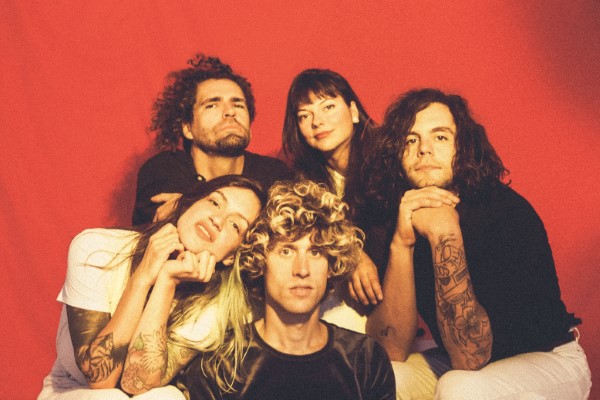 Montreal, QC-based band, Bon Enfant have unveiled the video for their new single, “Porcelaine” from their new album, Diorama, which was released on October 1, 2021, via Duprince.

The video for the single is directed by David Bourbonnais (who already proved his talent with the very psychedelic “Ciel Bleu” video) – in which everything shatters. The director took Bon Enfant’s lyrics about the destruction and fragility of relationships literally.

From the very first notes, the symbol of a smashing bibelot takes its importance. The group is all dressed in white and glitter (a nod to the disco rhythm of the song) in a church, bored, waiting for something to happen. This place of cult where extravagance has no place is then at the heart of the carnage, Bourbonnais not being afraid to set fire to the powder keg (Special effects and Pyrotechnics: Blood Brothers FX) or to invite the group to dance on the altar (Choreographer: Éliane Viens-Synnott).

Between love and violence, between reality and the unconscious, a door propels the protagonists towards a wooded area in which they find a horse and a mysterious jar containing a heart… Was it just a dream?

Check out the video below, and find out more about the band via our Five Questions With segment.

We are Bon Enfant, a Montreal-based quintet formed in 2018. We just released our second album « Diorama ». We do feel-good songs and we like to merge different styles and eras of pop music in our arrangements. Some say we have a little touch of 70’s Quebec rock.

Mostly Daphné and Guillaume are writing the songs. We don’t aim for a homogeneous sound in our albums, we love diversity so each of our songs has its little world. We usually create words and music separately so we get both music and lyrics living well by themselves. Then, we see if we have words and melody that fits well together and rework it. The most difficult part of the job is finding a perfect match between the words and the melody but it’s also the most gratifying part. We love to write in a certain style and then do a clash with the arrangements. For example, our song Porcelaine was composed as if it was a 60’s Françoise Hardy song and then we arranged it like a Japanese disco song. We feel like we get more surprising and interesting songs that way.

In the beginning, we were a bit depressed when we figured that our summer tour was canceled. We started playing video games and ate a lot of popcorn and chocolate bars. But at some point, we regain the taste of writing and it became a way for us to stay positive and get through the pandemic. We wrote all of our second album in confinement. We don’t usually make songs in that kind of circumstances, being forced to create in a not-so-inspiring environment. In retrospect, I think it was beneficial for us, our friendship is stronger, the new show is more solid and the new album is more artistically accomplished than the first, in our opinion.

We love all our songs but probably Diorama, we had a great time recording it.

Mon Doux Saigneur, they are the finest Quebec band.