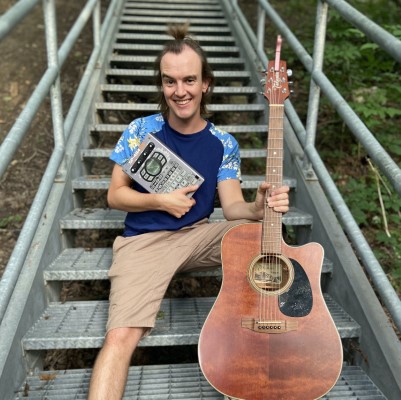 Now, following the release of Greenery, Kashew Butter unveils his new single, “Locksmith”, along with a video to accompany the release.

The clip features a narrative of David “Kashew Butter” Tosh arriving late for a gig (filmed at Toronto’s Bassline) due to getting locked out of his house.

The video is a metaphorical unearthing of a time capsule; it was filmed in 2015 and directed by Trebas Institute Entertainment Management Students Rachel Gray, Shaun Biship, Shaga and Nikeesh.

Check out the video for “Locksmith” below, and find out more about Kashew Butter via our Five Questions With segment.

Surely! My name is David Tosh, and I am the artist known as Kashew Butter. I’m the songwriter, principal musician, and producer on my tracks, and I also run the business side of Kashew Butter (hello to the Butter Bunch on social media!). Live, I play guitar, keyboard, and sing my songs, while looping synthesizers, harmonica, trumpet and ukulele, and running live beats. I love music and am so glad to be able to release my songs into the world.

My lyrics explore emotions and situations that challenge me personally. I try to offer a redeeming, positive outlook on life in my lyrics, while having fun with wordplay. Musically, I love building soaring melodies and pairing them with exciting harmonic ideas. I take these songs and produce them with the influences of all the recordings I love, which range from Flaming Lips style psychedelic rock, to DJ Premier’s beautifully spaced hip hop beats, to the drive of Drum and Bass music, the playfulness of funk music and the songwriting turns of classic folk and rock.

I work as a neurologic music therapist with multiple clients, so that has kept me learning new songs and creatively designing sessions that address functional client goals. I also act as musical director for improv comedians and have been building the musical landscape for theatre with the Second City Toronto. On top of that, I have been plugging away at production and promotion of Kashew Butter, and released my full-length album Greenery on September 1st, 2021.

I would suggest the listener open up my Greenery album on their favourite music streaming service, and shuffle play it. I love all the songs on the album (and they are all quite different), and feel that the universe would be able to guide the listener to one that resonates with them.

I’m vibing on lots of different styles of Canadian musicians! I love the hip hop stylings of IceThaOne and Bombay, the Toronto DJ/producer Telemetric, Kristin Fung’s Soul/RnB out of Vancouver, the amazing singer/songwriter Taylor Abrahamse, the synth magician who is Robyn Hatch, the deep haunting vocals of Aysanabee, the Saskatoon electropopper Velours, indie rockers Side Hustle, and the Toronto by Sudbury funk/soul artist Tessa. Thanks for the time CanadianBeats!!!

Related ItemsGreeneryIndieKashew ButterLocksmithontarioOntario MusicToronto ON
← Previous Story Five Questions With Neela
Next Story → PREMIERE – Down With Space release new single, “What You Keep Telling Yourself”