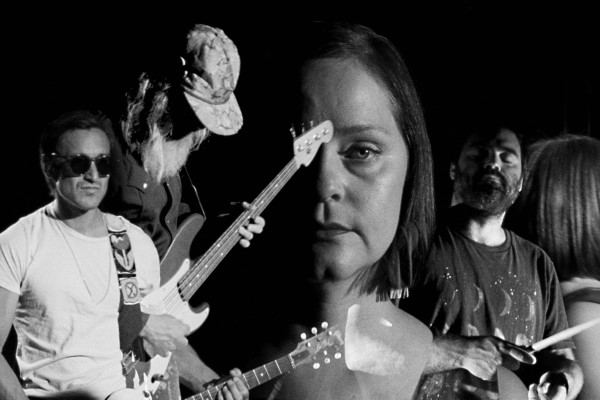 Ghostkeeper recently shared the new single “Grassy Plains.” On their spellbinding new single, “Grassy Plains,” the quartet of Shane Ghostkeeper and Sarah Houle rushes forward with the smooth motion of a horse’s gait, moving in unison through tangled guitar riffs, tumbling drum fills, and squelching synths. While Houle sings of the ancient practices of gathering herbs and lighting sage, anyone can relate to the feelings she expresses of longing for a loved one to return home.

Shane Ghostkeeper and Sarah Houle pay witness to the Indigenous experience by channeling it through psychedelic rock. Since their 2007 debut album, Children of the Great Northern Muskeg, the couple from the Metis settlement of Paddle Prairie, Alberta (now based in Calgary) have combined high-energy instrumentation with evocative lyrics and soaring vocals. Sarah’s voice is tender and hypnotic, while Shane has the power to glide from gentle narration to an aching falsetto or a bluesy growl.

They are now accompanied by multi-instrumentalist Ryan Bourne and powerhouse drummer Eric Hamelin, both longtime collaborators who make the band’s songs sparkle with melodic complexity and recently signed to Victory Pool.

“Our protagonist – courageous, wise and savvy with the mystical passages of realms – returns to us with gifts of strong medicine, love, romance and rock n roll.”

Ghostkeeper began when Shane met Sarah in their early 20s. Though he had already begun performing country covers in his home eight hours north of Edmonton, his introduction to an established visual artist and musician sent the duo on a new trajectory. As Sarah created images for the band’s record covers, t-shirts, and Indigenous masks, they released their earliest albums on Calgary-based labels Saved By Vinyl and Flemish Eye, home to acclaimed artists such as Chad VanGaalen, Yves Jarvis, and Preoccupations.