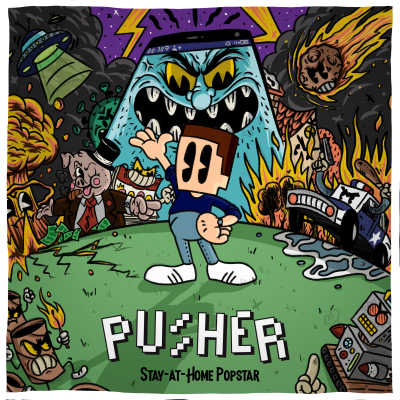 The time seems right for an artist like Pusher. On Stay-At-Home Popstar, the Toronto musician channels modern-day experiences and concerns that collectively affect us all, challenging listeners to contemplate the worldwide state of things while still providing them an opportunity to feel enlivened.

Most of these songs are deceivingly cheerful, being electronically infused with so much positive and regularly funky energy (along with the occasional joyfully blaring saxophone solo) that the subject matter of the lyrics is an intriguingly striking contrast. Among the topics touched upon are environmental crisis, technological peril, capitalist misgivings, and other global woes, and you need go no further than “Fall Apart” to experience such in an engaging way. That track sets the stage in terms of the themes and vibes that permeate the remainder of the album, their combination forming a spiritedly melodic sense of doom. Much of the music recalls pop culture styles from the culminating decades of the last millennium, including segments that sound like audio from a video game of the era (i.e., “Back in Time”). There are some exceptions to the greater dynamic, like the milder and borderline-symphonic “Productive,” the veritable apocalyptic lullaby “Someday,” or “Advertising” with its darker, heavier tone akin to something that The Faint might produce. But overall, this release is unapologetically dance worthy, at the same time as it begs existential contemplation.

Thus describes the musical niche of Pusher at the moment. The world may be crumbling around us, but with Stay-At-Home Popstar, it’s never been so much fun to go down with it. Even better, some might be inspired to question: Why?