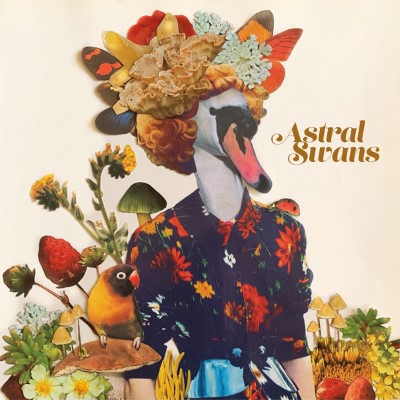 Astral Swans‘ (Matthew Swann) new self-titled LP is released unto the masses. The most upbeat, catchy, and immediate Astral Swans album to date, each song operates as an absurdist short story filled with Swann’s wry observations of the sad beauty of mundane moments. Swann almost exclusively composed the songs internally on solo walks throughout various cities around the world (pre-covid), and the same city over and over again (during covid). As Swann describes it, “the melodies were written in my head, on long walks alone, like spontaneous flowers sprouted from the id; ecstatic downloads from the cosmos. Sometimes the lyrics appeared with the melodies, other times they were refined more consciously, after the fact.”

To celebrate the release, Swann is sharing the live performance video of “Blackhole Town”, a love song “about a desperate person living in a small redneck town.” says Swann. “I often imagine it as a specific town in Alberta (where I grew up), but it could be any equivalent that I’ve passed through over many years of touring. Some places just feel inhospitable to progress. It’s essentially about a broke, young weirdo singing to their partner about wanting to move away together to someplace where they won’t feel so strange. Lyrically it’s a bit country, musically it’s trippy as heck.”

The songs on Astral Swans range from affirmations of joy amidst dread, composed in the streets of Shimokitazawa Tokyo (“Wind In A Mindless Universe”), to ballads of disoriented uncertainty set against the backdrop of early quarantine (“Spiral”). Songs about birds heckling the anxious and heartbroken in Vondel Park Amsterdam (“Bird Songs”), to a cover of the Cat Power classic, “Cross Bones Style” sung as a duet with Julie Doiron (Eric’s Trip, Mt. Eerie). The album closer “Awake For A While”, is an interrogation of somebody who is trying to piece together the events that transpired over many days of, well…being awake.

Astral Swans was produced and engineered by Paul Chirka (Calgary Philharmonic Orchestra), and Brock Geiger (Reuben and the Dark), with Swann functioning as a third producer. Sonically it is rich and spacious and features a diverse array of sounds ranging from delicate string arrangements to atmospheric synth freakouts, and deconstructive guitar solos. All the while, seated atop all the instrumental beauty and chaos floats Swann’s uniquely haunting voice which effortlessly warbles and swoons through its natural range and into Swann’s trademark falsetto. Astral Swans ST brings with it an arts commune worth of fantastic collaborators. Guest performers include Julie Doiron (Eric’s Trip, Mt. eerie) Cassia Hardy (Wares), LT Leif, Scott Munro (Preoccupations, Chad VanGaalen), Shalom Toy (SilverRing), Laura Hickli (36?), Minami Taga (Mako Puri), Swann’s childhood friend Carolyn Sweet, Jim Bryson (Kathleen Edwards, Weakerthans), and more. Each guest adds their own unique addition to the sound, bringing their own bit of the world into Swann’s solipsistic compositions.

In 2015 Swann gained prominence as the first artist signed to Madic Records, an imprint of Arts & Crafts helmed by JUNO award-winning musician Dan Mangan, and created for the purpose of releasing Swann’s debut All My Favourite Singers Are Willie Nelson. The album received widespread acclaim, Noisey described it as “a stark, beautiful project that embraces darkness rather than shying away from it.” The Calgary Herald called Swann an artist of immeasurable depth, incredible smarts, remarkable bravery and infinite charm, creativity, and insight.

2018’s Strange Prison (co-produced by Preoccupations’ Scott Munro) earned even more attention including accolades from  Paste, Tiny Mix Tapes, Post Trash, and a host of others. The album’s single CONTROLS reached number one on CBC radio 3 which led to a performance on CBC q, which highlighted Swann’s ability at “grabbing listeners’ attention and holding onto it.”

poisonedlava.tumblr.com/
Related ItemsAstral SwansBlackhole TownKillbeat MusicMatthew Swann
← Previous Story Cory Marks has had a banner year with so much added to his repertoire including with his first CCMA nomination for Alternative Country Album of the Year for Who Am I
Next Story → Taming Sari releases new single, “Crazy”