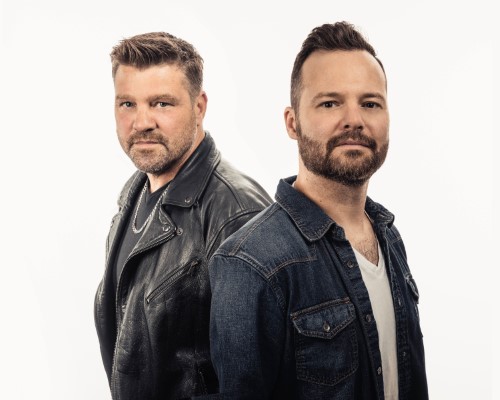 Doc Walker, who calls Manitoba home, is one of the most recognized Canadian country acts of the past two plus decades and this duo, Chris Thorsteinson and Dave Wasyliw (who have been friends since childhood), are humbled by their huge success. Some of their much-celebrated accomplishments include 21 Top 10 singles, 26 Top 20 singles, and eight #1 videos on CMT. They’ve won 14 Canadian Country Music Association awards, garnered over 40 CCMA nominations, and won numerous  Manitoba Country Music Association awards. The duo has also been nominated for seven JUNO awards for Country Album of the Year, including a win for their album Beautiful Life in 2009.

Prior to 2020, I believe we all tended to take music a tiny bit for granted and didn’t recognize how important it actually was in our day-to-day existence. During the pandemic and in this new somewhat post-pandemic era, we’ve come to realize that this is no longer the case, for both artists and listeners. So, it’s great to see that Doc Walker released their new single “She Wants What She Wants” on September 24 via all streaming platforms. This track is “a catchy tune about a woman leaving her man behind to find what she wants after feeling tired of being treated like an afterthought.”

I was personally thrilled to be able to conduct this interview for Canadian Beats as I’ve been a long-time fan of these guys. So … let’s get to it.

Hi Chris and Dave. Let’s chat about your new single “She Wants What She Wants.” I love the line, “life’s too short to be an afterthought, when she loves she gives it all she’s got.” So true! I was also chair dancing while a listened to this tune. I believe that it’s a very inspiring song that falls into the category of another classic Doc Walker song.

How does it feel to be getting another single out to your fans, after I would say for many fans way too long a wait?

It feels amazing to finally get some material out to the fans. It’s been in the works for a while, but of course, Covid threw a monkey wrench into everyone’s plans.

The idea for the new single came to me one day when I (Chris) was in a very ’80s country mood. I was thinking about my daughter and how someday she will get her heart broken one day. It made me feel helpless as a father and I realized all you can do is teach your kids value and strength. I came up with part of the chorus and sent it to Dave, he did a fantastic job of creating a great story.

Who wrote “She Wants What She Wants” and who produced it?

The song was written by Dave and me. Dave produced the song.

Did you record this single in a studio together or did any part of it have to be done remotely?

We were fortunate enough to have most of the song recorded before Covid hit, so it was recorded with everyone together in the studio.

As with most Doc Walker songs, we’ve tried to create music that connects with people on different levels.

This one is for Chris. Tell us all about what you did the day this single was released – your “new release party.”  “Times are changing,” aren’t they?

Yes, I was in the skid steer planting trees that day, lol. It was one of my favourite release days, I love being outdoors 🙂

Stream or download “She Wants What She Wants” here.

Let’s change to a short Q & A about your live shows.

You have a reputation as an entertaining live band but you also enjoy your acoustic performance shows. Tell us a bit about that.

We love playing both, full band and acoustic shows. We find the scaled down duo shows really give Dave and me a chance to let the audience know more about who we are. It also gives us a chance to tell the fans about how the songs came to be.

I know you’ve had a few live shows now. How does it feel to back up on stage again?

We find there is a new sense of excitement for us. It’s like keeping a bunch of thoroughbred horses locked up for a year and a half. lol

What are you most-excited about for your upcoming show in your hometown, at Club Regent Event Centre on November 5?

Hometown shows are always special for us, we get to see a lot of family and friends. We also get to sleep in our own beds after the show. lol

And last but not least, what do you want to put out there for your fans to know.

We just want the fans to know how much we’ve missed them over the last while and how excited we are to be back on the road and have some new music to play for them.

We, at Canadianbeats.ca, thank you Chris and Dave so much for taking the time for this interview. It’s been a particularly magnificent ride for me to get to know you both. Recognizing that you are as committed to your music and fans as much now as you were when you started out makes for a much brighter future in Canadian country music.