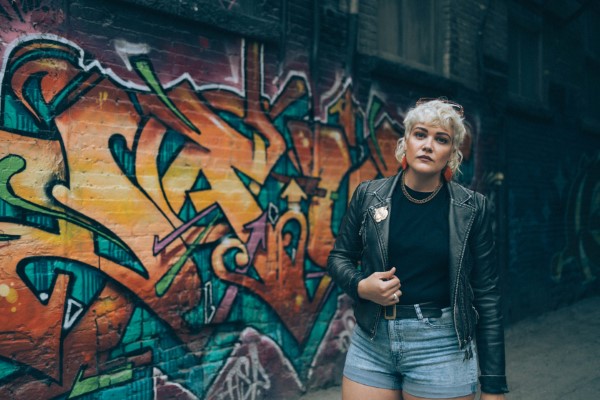 Winnipeg singer-songwriter and multi-instrumentalist Sierra Noble has released their latest single, “Let Me Out of Here” and isn’t afraid to share their vulnerabilities with the world.

The single marks Noble’s return to music after a five-year-long hiatus in which they took the time to recharge and refine their own story.  Noble’s experiences as a gender non-conforming artist have shaped the way they approach songwriting and production, and they hope to use their voice to inspire others.

Having co-produced with Matyas — formerly of The Weakerthans and The Sheepdogs — Noble is ready to find their way back into the spotlight with new music and a new take on themselves.

We caught up with Sierra Noble to learn more about her experiences as an artist, writing new music after five years, and what’s next on the horizon.

What has the journey been like for you as a songwriter? Were you writing from a young age, or did you find this type of expression later on in your life?

As a child, I loved writing poetry and short stories, as many kids do, but I started writing songs when I was about 17, shortly after starting to learn guitar – which was mostly self-taught.

To be honest, I don’t feel able to speak specifically about being in the industry as a gender non-conforming artist because my coming out has been relatively recent. Though I can certainly speak to the need to create more opportunities in the industry for women and non-binary artists, songwriters, producers, engineers, and pretty much every facet of the music industry. I was selected to be a participant in this year’s Women In The Studio (WITS) program facilitated by Music Publishers Canada, and the main goal is to close the gap in gender representation in the recording industry through mentorship, networking, and creating community among women and gender non-conforming producers across Canada and around the world. This kind of programming is crucial in the effort to improve the highly offensive statistics. Only 2% of recording credits in the Billboard Top 100 list belonged to women and non-binary recording professionals. This is not because we don’t exist, it’s because we are not being hired and not being credited for the work we do. It’s high time for change. That begins with artists and record labels actively seeking out non-male producers and engineers, it begins with studios hiring more women and gender non-conforming staff (and no I don’t mean receptionists and assistants), and more organizations like Music Publishers Canada making crucial programming like WITS possible.

In the time that you took to regroup ahead of releasing this new music, can you expand on what you were going through and why you felt you needed to step back from performing and producing?

By the time I released my last album “City of Ghosts” in 2016, I was 26 years old and had already been a full-time musician/artist for 13 years. 13 of arguably the most formative years of anyone’s life, I spent on the road, making big decisions, working with people more than twice my age all around the world. Sounds amazing, and in many ways it was, but I also was facing all of the things that most female artists face, except at too young of an age. I experienced chronic stress, sexual harassment by men 20 sometimes 40 years older than me, sexual abuse (my abuser – who works in the entertainment industry – still walks free to this day), all on top of traumatic stress more common to young people such as coming from a low-income single-parent household, having an anxiety disorder, and being bullied all through junior high and high school. That is a lot, but there was never any time to stop and process. Stop to feel. I was busy and thrilled about that, feeling like the luckiest kid in the world to be pursuing my passion every day and succeeding, but I didn’t know at that time the toll it was taking on me to have to put all of those feelings in a box labelled “deal with this later”. Later never really came…until it did. The box burst open when I was 26, living in Nashville. I fell into the deepest depression I’d ever experienced, my anxiety was debilitating, and I was having panic attacks every day, usually laying on my cold bathroom floor. It was my mind and my body sounding every alarm they could muster begging me to stop. Stop, and get help.

I eventually moved home to Winnipeg to take a break. I never intended the break to essentially be 5 years long. I was still performing here and there and writing some, but mostly I needed to rest. I started seeing my therapist again and started chipping away at how my life and career thus far had affected me, how to heal, and building tools to help me get back to music in a healthier way. It’s been a long road. I still go to therapy almost weekly, but as I write this today, I feel more well than I ever remember feeling. I share my life with my beautiful, supportive partner, Ashley, who is also a musician, and her two cats Ben and Honeybea. I am rebuilding my career on my terms, with the support of a fierce female manager, Elise Roller who keeps my wellness as a top priority above literally everything else. I am so grateful for where I am today, excited for what the future has in store, and empowered to start being a voice for change in the industry.

How did it feel to put your feelings down on paper and create “Let Me Out of Here”?

It felt like my subconscious had been working on this song for years, waiting for the right time and the right environment to feel safe to come out. Writing this song with Rusty was such a gift, as is our friendship and collaboration to me.

After taking time away from actively creating music, do you find you approach your songwriting or producing in a different way?

I am trying to get back to writing the way I used to, which was for myself first. Asking “do I like this?” before wondering what anyone else might think. As my career progressed there were more and more opinions being forced upon my art by publishers and label heads and even fans, and I wasn’t strong enough at that time to just say “thank you for your opinion but this is my song.” Those voices would rattle in my head so loud that it became hard to write anything that I truly loved. “Be Who You Be” from my last album was the beginning of writing for myself again. I wrote it with my best friend Craig Wilson in Nashville, in the midst of the dark time. “Let Me Out Of Here” is another one. Today and from this point forward, my goal is to write music that I love first.

Are you working on an EP or releasing more singles this year/next year? What can your fans expect from Sierra Noble?

You can certainly expect more releases in 2022!