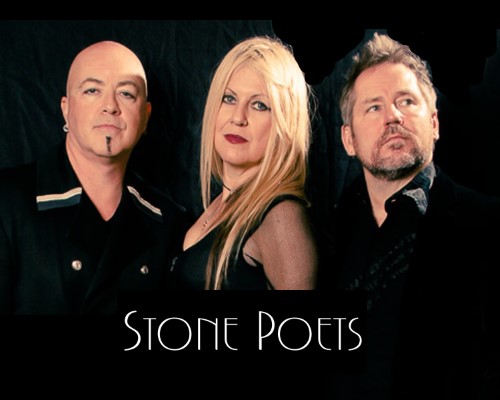 When asked about the story behind the song, the band shares,

“It’s a crucial time for humanity and our planet …the pandemic, human rights, gender equality, global environmental issues are just a few of the overwhelming concerns that need to be addressed – it’s time to put our differences aside and start thinking globally … what affects you, affects me – no matter where you call home.

As artists, we need to use our voices to be the change we want to see.

As Canadian citizens and songwriters, Stone Poets were compelled to write a song addressing the vast differences that create so much anger and frustration.”

“The Great Divide” asks, “Why can’t we see eye to eye”? and “Why do we fight the fight nobody wins”?

The song wraps up with a bold statement leading us to reflect, “We’re not so different, you and I… let’s meet in the middle of the great divide”.

Check out the single below, and find out more about Stone Poets via our Five Questions With segment.

Stone Poets is a contemporary folk trio; Cherelle Jardine – lead vocals, guitar, and mandolin; Scott Jackson – lead vocals, guitar, harmonica, and percussion; Marc Gladstone – Vocals, keyboard, and percussion. Formed in 2011, almost by chance: Scott approached Cherelle at a music festival where all three of us were playing in other projects… he asked her if she’d be interested in co-writing a single song he’d been working on… that song evolved into a virtual song factory. Now, ten years, 4 albums, and 2 singles later, Stone Poets have forged our own unique musical style.

Stone Poets bring together a blend of poetic lyricism and powerful instrumentation, creating music that genuinely matters. Somewhat different from traditional folk music, the instrumentation is piano-driven with richly laden harmonies, and the combination of Cherelle’s street smarts mixed with Scott’s background in Elizabethan poetry results in edgy and thought-provoking lyrics. You can listen here.

Stone Poets have been writing and are currently in pre-production for our next album which will be coming out Fall 2022. Also working with iconic Canadian artist, Tim Mohan, producing videos for songs from our body of work. (see HERE). The music industry being hit so hard by the pandemic inspired us to write a song called, “Get the Vax”, a slight departure for Stone Poets, turning a negative into a positive. Listen here.

Wow… tough question! The three of us might each answer differently on our own, but we all come together on “The Great Divide”, written in Nashville with esteemed songwriting couple, Daryl and LeeAnn Burgess, it’s a song addressing the divisiveness in our current climate. We wanted to use our voice to be the change we’d like to see in the world; to bring us together; to close that “divide”.

Canadian Beats is all about Canadian music, so who are your current favourite Canadian Bands/artists?

Since there are three of us, let’s break it up this way: Cherelle loves Blue Rodeo, Alanis Morissette, and The Tea Party… Scott loves Ron Sexsmith, Leonard Cohen, and Daniel Lanois… Marc loves Half Moon Run (having taught one of the members he might be a bit biased), City and Colour, and The Weeknd…