Five Questions With The / Les Pxrtals 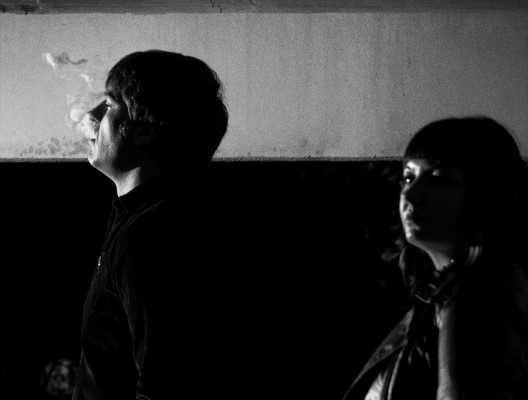 Saskatchewan-based band, The / Les Pxrtals recently released their first single, “Clin d’oeil”. The band is composed of Lévi Soulodre, his sister Natalie Soulodre, and their musicians. They are heavily inspired by the poems written by their mother Cheryl Georget Soulodre for their songs.

“Clin d’oeil” is from the band’s upcoming album, La Poétesse, which will be released on October 8, 2021. This first single touches on the feverishness of summer love, while sporting distinct notes of New Wave. An official music video accompanies the single. Shot in black and white on the banks of the South Saskatchewan River, it is timelessly beautiful.

Check out the video for “Clin d’oeil” below, and find out more about the band via our Five Questions With segment.

The Pxrtals (said “portals”) is the enigmatic musical project from Saskatoon-based Lévi Soulodre, long-time musician and bandmate in the Canadian Prairie music scene. Imagine the sound of Gord Downie’s ghost trekking an ageless forest to a soundtrack featuring Arcade Fire, Malajube, and (of course) The Tragically Hip, and you will find The Pxrtals… the ‘x’ variable celebrates Lévi’s affiliate bands (Slow Down Molasses, Volcanoless In Canada, Reform Party, From Chimpan-A to Chimpan-Z, liberated noise) and lived musical experiences in sharing a musical project that spans the sonic spectrum and deemed “magnificent” by Live Nation UK.

Having had a classical violin upbringing and then discovering both vocal jazz and the electric guitar in high school, I’ve since explored nearly every facet of the musical spectrum, from ambient, meditative twinkles to full-out, speaker blown psychedelic forays. As a general focal point, The Pxrtals bridge the sound of 60’s classic rock / pop that my parents listen to, with the 90s alternative rock sound that I grew up with. The writing style can be super varied, from spur-of-the-moment song ideas and gems captured 1-take on a voice memo, or else lyrics discovered from a university notebook that eventually pair with a few differently time-spaced riffs, all filtered through a sort of raw, emotional vortex.

Unfortunately given the present circumstances and business in the recording studio, no immediate dates are set, although we are planning to perform at Saskatoon’s legendary venue Amigos’ before Christmas. Pxrtals performances are unique in their variability; from acoustic sets at care homes to impassioned rock n’ roll sets; the best way to explain the live performance is what my friend Jordan said about a past Pxrtals show: “last night’s show was unlike anything I’d ever seen. “, which about sums it up 😉 Paul Ross of the amazing band Foam Lake deems it “Intricate, dreamy, conflicted, and longing.”

That’s a really tough question. I’d actually suggest either “Dawn of a Global Community” or “1000 Years From Now” from the debut album Un Jour, as these songs to me reflect the strongest feeling of hope I could project that this world and society will- is!?!- truly transforming towards a greater universal consciousness and thus continue to grow in a healthier direction, and not the other way around…