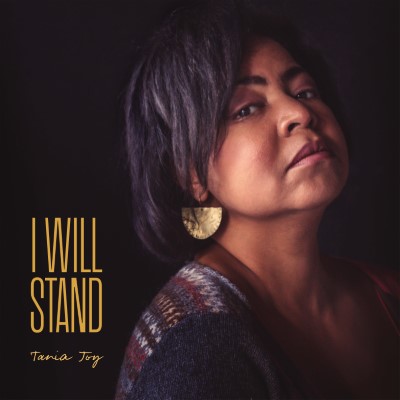 I Will Stand is the latest EP from Toronto-based artist, Tania Joy.

Tania, a graphic artist by trade, bought her first guitar 20 years ago but didn’t start playing it until 2009. As Tania says, “My life was going through a big transition, so I used the guitar to get through it.”  Since that time, Tania has been working to hone her newfound craft – culminating in this very EP. Tania has also used her newfound voice to foster open mics and co-found a non-profit music festival, Springtide, which hosts over 70 acts in various venues around Uxbridge, Ontario.

This unique background can be felt throughout I Will Stand. Each song seems as much interested in engaging in difficult topics as it does to promote healing from that pain through music and community. For example, the song, “Planks and Marietta,” dives into the topic of the cycle of racialized violence, but maintains a sense of hope with Tania’s confident, welcoming voice as she calls for change in the chorus.  The song itself, Tania explains, is meant as a protest song very explicitly inspired by wanting to reconcile her feelings on the death of George Floyd. Furthermore, the song was released exclusively on Bandcamp during Black History month with all proceeds from downloads being directed to Black Lives Matter. In other words, Tania is serious about using music for change. The album features electric guitar, bass, acoustic guitar, organ, drums, Wurlitzer, strings, Farfisa, & synths to accompany Tania’s vocals, but maintains a dressed-down simplicity and honesty similar to the works of Tracey Chapman.

A standout track on the EP for me was “Stay Here”. In”Stay Here” Tania empathizes with the listener about our collective exhaustion at the state of the world but then coaxes us with a lullaby-like melody to stay and fight for a better tomorrow – if not for ourselves, for our children and our children’s children. As Tania says of all her songs on I Will Stand, “I hope these songs reach those who need to hear them and empower us all to lean into the light.”