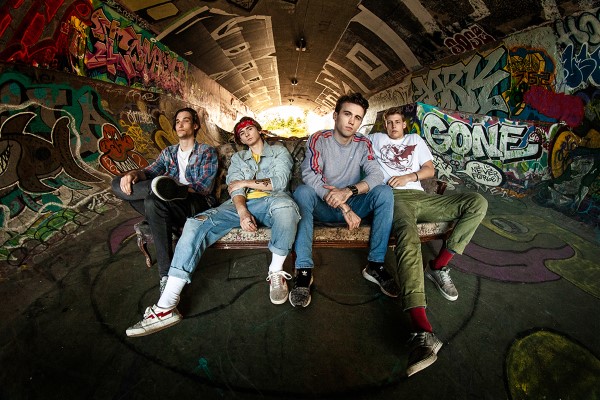 Vancouver-based Indie Rock band Black Pontiac just released their latest single “Island Honey” via Crank Media and all streaming platforms. Produced by Matt DiPomponio of Echoplant Studios, this bright and bold new single is a preview of what’s to come from the band’s forthcoming debut album slated for release in 2022.

Making waves with their rocking new release, Black Pontiac’s groove gives listeners a great escape, a summer fling and a psychedelic shindig rolled into one. Written by the band during the colourless days of the pandemic lockdown, “Island Honey “ was the result of a Piña Colada daydream steeped in hope for brighter, sweeter days ahead.

Combining influences ranging all the way from the Hives to Jay Z to the iCarly theme song, Black Pontiac consists of lead singer Matty Mclaren, brothers Mack and Sam Riddell on guitar and drums respectively, and Avery John Shoesmith on bass. The boys have made quite a name for themselves in their hometown’s underground music scene and intend to deliver a plethora of styles for their upcoming debut album brought together by ice cold riffs, a versatile rhythm section, and devastating displays of provocative lyrical prowess.

On “Island Honey”, here’s what they had to say:

Take us back to the beginning, why the name Black Pontiac?

Our guitarist Mac used to own a Pontiac Sunfire we would always mob around the city in when we were all in high school. When we began the conversation of what to name the band, Black Pontiac was his idea and the first one any of us came up with. At the time we thought maybe we could do better so we spent a few days writing about a hundred names into this google doc before finally realizing Black Pontiac was the one.

How does it feel to be releasing your debut album?

It’s been an incredible process, our producer Matt DiPomponio really cultivated our creative instincts, resulting in a product that we’re genuinely stoked on and want to listen to for the first time. Most people have only heard the very pop-oriented singles so we’re looking forward to showing everyone the full extent of what we do and what we’re capable of with this album.

What was it like producing the album in a pandemic?

Honestly, without the added pressure of staying tight as a band playing shows, it was really nice to just be able to focus entirely on the recording. It was our sole focus and allowed us to really spend time just trying weird things in the studio we didn’t even think were possible before.

Out of all the styles your album encapsulates, which one is most unique to you?

I think everyone in the band has a different opinion on this, but we have a song called “The Streets Are Hot Tonight” that I personally think no one has ever heard anything like before.

Can fans expect more singles before the album release?

Possibly one more, but follow us for updates! We’re on everything! (except MySpace that’s before my time).