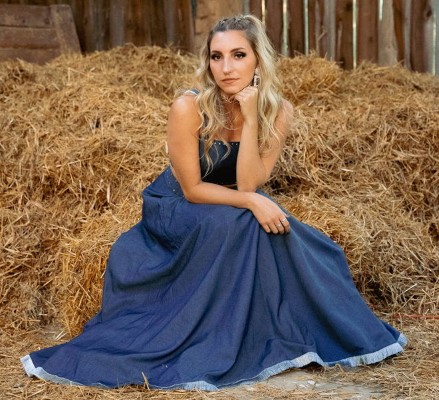 Upon first look and listen, it’s easy to label Beaverton, Ontario’s Sarah Wickett as “Country”, but she goes way beyond the one genre. She continues to release singles, including the brand-new “Momma’s Boy”, under what she classifies as “Desi-Pop Country”. This, along with her many talents and interests, are sure to keep her audience, both online and off, growing for years to come.

I’m sure “Momma’s Boy” is relatable to so many people’s current or past relationships; did the content stem from a personal experience?

Yes, absolutely! The inspiration behind the song came from my experience being in an interracial relationship and how difficult that can be sometimes. The lyrics talk about cultural differences and how hard it is to be in love with someone whose family has a lot of expectations. I think that can be really hard on a relationship no matter what your background is, and yes – I think a lot of people have probably been in a similar situation.

The single has been described as “Desi-Pop Country” in terms of a combo of genres and they all definitely shine through while also blending so well. Was the combination of the genres your intent all along or did it just happen during the creation process?

Thank you so much! It was the intent for sure. I have another Desi-Pop Country song out called “Accent” and it was released last year; that was kind of the pilot. We knew the two genres could work, we just didn’t know how well they could work. As soon as we finished “Accent”, I knew I wanted to do another one and really just dive even deeper into blending those sounds.

You’ve had some stellar performance opportunities over the years! Are there any opening slots, festivals, or solo shows that you’ll always remember as a favourite?

I will always remember my first festival, which was the Smoke N Spurs Festival in Powassan. I opened for Bobby Wills & Wes Mack and it was such an amazing experience. It just felt like a bunch of friends performing all night. I also think that was the first show I actually saw people singing my songs with me, so that was a really cool experience. There’s nothing I love more than being on stage.

You have a dynamite social media following with over 125K fans across all of the platforms. What do you think draws people to give you a follow or a “like”?

I know people say stick to one ‘niche’ but I do A LOT of things. I really enjoy traveling and vlogging and I sell driftwood. I also really enjoy editing. So I think I have a wide range of followers that also enjoy a wide range of things. I like the idea of having many different passions and it’s cool when you get a follower who loves you for your music, but also discovers that you do other things and then they eventually translate over and become a fan of everything you do.

I’ll be focusing heavily on pushing “Momma’s Boy”. We have some cool plans for the song and I’m excited to continue to work on those. I’m excited to hopefully be getting back on stage soon, as well. In the new year, I will be getting back into the studio to work on finishing up my EP which should be released next year. I’ll be writing another Desi-Pop Country song to keep that momentum going for this new genre that I’m trying to introduce!