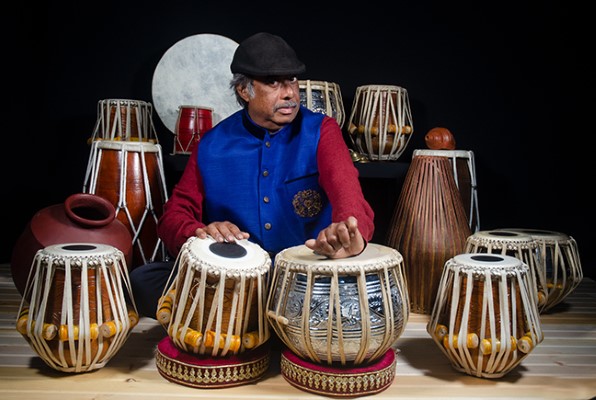 The first release from the group’s upcoming eighth album, For the Love of Tabla, “Spellcheck” gets its name and inspiration from everyone’s favourite, frustrating smartphone feature… Autocorrect.

“The title is a joke,“ Das reveals. “If you try to type out tabla on your phone, spellcheck changes it to table. I get messages all the time from people asking: ‘Where can I buy a new table?’ I tell them to go to a furniture store.”

The composer, educator, and virtuoso tabla player also shares that when TTE was nominated for a JUNO, the group’s name was announced as the Toronto Table Ensemble. Who knew that snafu would plant a subliminal creative seed for the ensemble’s latest composition?

Autocorrecting aside, “Spellcheck” reveals that ‘table’ and ‘tabla’ are as complimentary in sound as they are in name. The song combines the spontaneity of table top percussion and a modern drum kit groove with the traditional, North Indian classical art of tabla in an exciting rhythmic mixture.

“I wrote a piece that starts with me playing on a table, like I used to do when I was in school,” Das explains. “Then a drum kit comes in to really kick in the groove, and then the tabla adds sophistication based on that groove. So there are really three elements to the piece: The birth of the rhythm, the groove itself and then the expansion of the rhythm to the highest level.”

“Spellcheck” is truly an all in the tabla family affair. Members of the TTE Youth Ensemble play on the track along with accomplished London, Ontario drummer Dale Anne Brendon, who studies tabla with Das.

The FACTOR-supported video for the spellbinding single recently made its debut with a YouTube premiere; produced and directed by Melissa Das-Arp, it adds a visual layer of artistry to the pulsating instrumental. The clip features Ritesh Das immersed in his own world while recording and mixing, creating an alternate reality with the other players on the track. It’s a world that Das-Arp was already quite familiar with as “Spellcheck” and all the songs for TTE’s new album were written and recorded while the couple has been riding out the COVID pandemic at home.

“Throughout last winter I would hear all kinds of music coming from the basement,” recalls Das-Arp. “There was one piece I heard over and over that caught my ear, a catchy drum pattern that sounded very different and one day I came down to see what that was. It was Ritesh playing on the table.” Das explained to her that he might just add tabla and some other percussion and call it “Spellcheck” in reference to how tabla is always autocorrected to table.

Witnessing how the new album was being recorded remotely with collaborators gave Das-Arp the idea for the video. “I wondered what that experience would feel like, to only work with people online for more than a year, some he had never even met. Who are they really?” she asks. “So I thought of him being in front of his computer mixing these sounds and letting his imagination take over.”

Check out “Spellcheck” below, and find out more about Toronto Tabla Ensemble via our mini-interview.

My name is Ritesh Das and I am the founder and artistic director for The Toronto Tabla Ensemble established in 1991, for both the band and the school. Since then I have collaborated with all kinds of music genres, which included Japanese Taiko, Flamenco, Jazz, Afro-Peruvian, Irish and Scottish music, and Rock and Roll to name a few. After living in Toronto for over 35 years, I now reside in London, Ontario.

Tell us about the recording process behind “Spellcheck”?

Have you ever typed tabla, and spellcheck autocorrects it to ’table’? Henceforth we were announced as the Toronto Table Ensemble for our JUNO nomination in the early 2000s. I have people emailing me where they can buy a good ’table’, I tell them to go to a furniture store.

So, I started composing grooves on the table and decided to add a drum kit to give it furthermore groove and then colour it with the sophistication of rhythmic patterns of tabla. Taking it a step forward, my wife Melissa gave it a visual through her music video.

Recorded during the pandemic in my own home studio as well as drummer Dale Anne Brendon’s and my students at their home studios, and finally mixed and mastered by Gary Honess at KuHL MUZIK in Toronto. The contribution for this single was done virtually from London to Stratford to Toronto all the way to Halifax, Nova Scotia where one of my students now resides.

What keeps you going? How do you not want to quit when things get tough?

Creativity keeps me going. At this point in my life, I have learned and gathered tools during moments of depression or down periods, what I could do to bounce back and put that energy into something positive. Some of the most important tools for me are, number one is maintaining my tabla practice, followed by good exercise, cooking great meals, and proper sleep. It sounds simple, but it works!

I also have the luxury of speaking to my wife who is also my sound board.

Got any fun stories hanging with Jeff Martin from The Tea Party?

Cigarettes disappearing!  Initially, when the Tea Party separated around 2006/2007 and Jeff Martin decided to do a solo album I was asked to come to Ireland to record. While we were there I shared a cottage with my friend and Tech Support Evan Ritchie and Mr. Jeff Martin had a habit of relocating our cigarette packages, to a point we used to hide them from him.

During that time Koch Entertainment and Eric Alper who used to work for them decided to send Jeff Martin and myself on a promo tour of his solo album to Australia. I remember our concert in Melbourne we went on stage, played all the Tea Party songs, I accompanied each song on tabla, feeling quite nervous. What would his fans do? Because there were mixed emotions on the separation. To my astonishment, after the final song was played, Jeff took his final bow and left the stage and when I took my final bow the crowd didn’t want me to leave at all. I was touched by the Tea Party fans in Australia of accepting me as an individual, musician and not just someone accompanying Jeff Martin.

There’s been a real change from the words ‘world music’ to ‘global music.’ Overdue? Thoughts?

To me nothing has changed, it’s just another term for the same thing. What will it be next? Earth? Planet? Music is Music. Doesn’t matter if it’s called World or Global, I still find it confusing. I’ll keep making music and others can label it however they want.