The New Niagara Surge: Brett Friesen and The Particle Sound 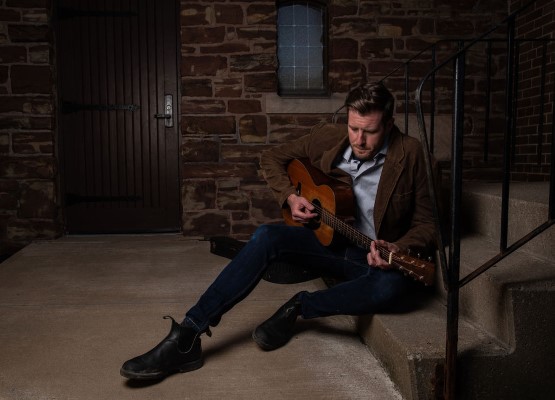 A fresh wave is rising in Niagara—and it’s coming out of St. Catharines, with singer-songwriter Brett Friesen and new label The Particle Sound steering the ship upon its crest.

It could turn out to be the same sort of tidal impetus that launched the likes of Alexisonfire and Attack in Black into the broad Canadian musical consciousness back in the early 2000s, eroding mainstream barriers to clear the way for that region’s scene to thrive, though such a swell would dissipate and ultimately crash with the onset of the COVID-19 pandemic. Now Brett, with the help of Sleeper Set Sail alumni Mike DaSilva and Casey Baker, is here to once more stir those waters with his music and their collective skill and vision. Afterall, they’ve all been around since that last peak.

Brett: Years and years ago, so around the same time that Casey and Mike were being super successful with Sleeper, I was being unsuccessful as a songwriter and a musician for the most part… I toured around Southern Ontario a little bit trying to get some traction opening for groups that I had no business opening for—screamo bands and stuff like that—being a singer-songwriter type. That grind kind of got old really fast, so I decided to go back to school and pursue what I originally thought that I’d do with my life, which is teaching. So I did that, went back to school, got my teaching degree, got married to my wife, had a kid and kind of was just living that life for a long time.

Then, in 2018, tragedy befell Brett’s life with the passing of his father. But the subsequent celebration of life and conversations with his dad’s friends proved inspirational.

Brett: My dad was always a really great poet. He would always write my mom really beautiful poems and things for special events and things like that. So he would always say to his friends, “If I could write the lyrics and he’d write the music we’d make a million fucking dollars.”

He would go to a bar with his buddies and see some guy playing and he’d say, “Oh Brett’s 100 times better than this guy.” But he would never say that to me. It’s just one of those things… We had a loving relationship but he was never all that open with his feelings directly with me about that… So having all of his buddies tell me those types of things, that kind of got me thinking about getting involved in maybe getting musical again.

One of those experiences occurred with his father’s long-time friend Kenny Goertzen.

Brett: He started talking about this song that they’d written…  Now the song he originally wrote it with his other friend in mind, his friend’s name was Paul Oliver, and Paul was the campfire guy. Any time there was a campfire going on anywhere he got his guitar out and his harmonica and he entertained everybody so he kind of wrote this song with him in mind… He gave me the lyrics and I went home into the basement and started fucking around with some chord progressions and some melodies and came up with this song called “Campfire Song.” Kenny had turned 65 that year, so my whole goal was to try to record it, so that I could give it to him as a gift.

That’s when Brett got in touch with Mike DaSilva, aka MADbeat, himself a former musician of the area and since an experienced hip hop producer.

Mike: I’ve had a similar background to these guys, started playing rock bands and stuff, and in the last several years went to the production side of things… And that kind of automatically leads into the engineering end of things, which I’ve really embraced in the last little while… I think that the best way to be working on music in the first place is for the satisfaction and to get your ideas out and for the fun of it. And Brett came over and that’s exactly how it started.

Brett: I just kind of contacted him to say, “Hey man, I’ve got this idea. I know you’re kind of into a different style of music that you produce, but if you could just give me some time in the studio to try to get this track down then that’d be cool.” So we got together, it was an amazing experience, and we put this track down… you know, country-inspired…

Mike: It was a total ditty.

Brett: So we kind of started the journey from there. And we made an EP together called Repeated Numbers, which I released at the beginning of this year. That title, Repeated Numbers, is a reference to my dad, ‘cause he kind of inspired it all. Right after my dad died, every time I’d look at a clock, every time that I’d look at anything that had numbers on it, I’d see repeating numbers, I’d see 3:33 or 2:22 or 11:11… I said something to my mother and she said, “You know what that is? That’s an angel sign. That’s your dad speaking to you.”

Around that same time, Mike’s erstwhile bandmate Casey Baker came into the picture.

Casey: Brett called me a year ago and said, “I’m working on music,” and I said, “Why? That’s a terrible idea.”

And when Brett called me, he goes, “Well I dunno, maybe you should come take a listen. I’m working with somebody you might know.” And I said, “Who’s that?” And he said, “It’s Mike DaSilva.” I said, “What?!” Mike DaSilva, the same guy who was once in Sleeper Set Sail and decided to pursue his own path with production stuff, which was ultimately a major contributing factor to the end of that? So it was strange and uncomfortable and weird and nerve-wracking, and I hadn’t been in touch with Mike in 15 years. And though Brett and I were always buddies, I couldn’t believe he was going to like, crack open this can of worms again. But I heard the song, “Campfire Song” it was, and I was like, “Holy shit, there’s something going on here, I’d like to hear more.” And then he reintroduced me to Mike, and Mike and I were like… It felt like we didn’t miss a day. It was like I walked in, we had a handshake, and we started right where we left off 15 years earlier.

So the three started working together, with Casey and Mike behind the scenes to help fuel Brett’s momentum. A new folk-oriented single, “Comeback,” was recorded, and a corresponding music video shot in downtown St. Catharines, along with more songs in the works.

Brett: The universe started to expand a little bit because really, who’s telling us what to do, nobody’s listened to it anyway, right, at this point, so let’s just do whatever the hell we wanna do and make the songs as great as we want them to sound. So these songs have taken, you could say maybe a little bit more of a pop-driven direction. You know they’ve still got a folk/country/sing-songwriter vibe to them but, the production aspect of them has brought them to a different level. I’m definitely excited for people to hear the new stuff that we’ve done because it’s definitely different, and in my opinion the songwriting is a lot stronger and the performance is stronger and the production’s just as great as it was on the last EP but it’s definitely in my opinion just better music overall.

The idea of a record label also began to emerge.

Casey: It started to become clear that the vehicle in order to gain some traction was to create some kind of identity… And then that idea evolved even further into the idea that everybody that I know that’s an indie artist trying to get some traction is basically sitting behind a computer, and that’s their only means of attack. And I said, “Fuck that. Let’s get back out there.”

Thus was born a vision for what would become The Particle Sound, with Brett Friesen the flagship artist.

Not all of us are gonna hit that infectiveness on every chorus of every song, but Brett did that to me, and I think Brett did it through the way Mike coached him and harnessed him and captured him, and that’s The Particle Sound. It’s not about R&B or hip hop or rock or country or whatever, it’s about talent and a message and emotion being captured in an audio file that we want people to hear. We want to have them have that experience.

From there, the marketing campaign “Local Brews and Local Tunes” (#harvesthomegrowntalent) was conceived, with the aim to unite the Niagara music scene with performances at local wineries, breweries, etc.

Mike: That’s literally the organic story of how it started, is let’s keep making and producing really good music and getting out there, and the whole live events and stuff… I don’t think we saw it coming this soon, but it’s amazing that we’re back in the swing of things and there’s definitely a void to be filled in Niagara, and I think we’re happy to be the ones to fill that because… I kind of took for granted how incredible the music scene was here years ago… You couldn’t ask for a better time to be serving a new resurgence of something like this. I think it’s really exciting.

The Particle Sound officially kicked off with a July 25 launch party at The Mansion House, featuring live music by Brett. More such events are anticipated with the approaching Niagara Grape & Wine Festival, and additional artists on the label’s roster will be announced as time goes on. For now, Brett is proud to be the face and voice of what they’ve started.

Brett: This Particle Sound crew, they’ve been nothing but amazing and helpful in just pushing me to keep going. So that’s kind of where we’re at now. We’ve got this initiative that we’ve kind of started with my music being kind of ready to go, and then we’re just continuing. So it’s been great.