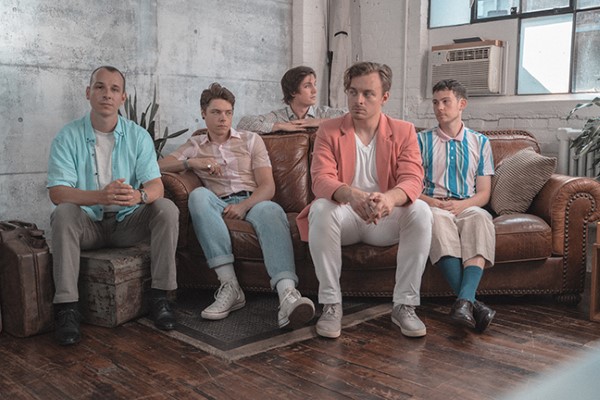 Canadian rock five-piece, The High Loves are back with their new single, “Sometime”, which captures that very freedom of knowing a relationship is over and, hey, you did all you could.

Appearing on the alt-rockers’ forthcoming EP, Too Much Of A Good Thing, out this Fall, “Sometime” was one of those songs whose inspiration came out of nowhere.

“I was just practicing my guitar one day when the song in its entirety just popped into my head,” guitarist Noah Mockton says. The lyrics were imagined as a goodbye letter to an ex. “It’s about being okay with change,” he adds, “and letting someone you love go.”

The band’s friend Elise Mariah sings backup on the track, with an easy “sha-la-la” that imparts an early rock’n’roll vibe to the second and third chorus. The production style is deliberately less-is-more, and evokes a breezy, beachy end-of-summer attitude.

“We worked really hard not to overdo this song,” keyboardist Jeremy Ugro says. “We knew we had a great groove, so all we had to do was not fuck it up.” The synth lends to the song’s fun, which-decade-is-this throwback feel, while also providing enough contrast in the lead-up to make the guitar solo a standout.

“The solo was a bit of a challenge,” continues lead guitarist Marko Stojanovic, though he did have a lot of fun recording it. “There’s a ton of ways you can express a single note and finding the right one proved difficult. I’m thrilled with how it turned out in the end.”

Check out “Sometime” below, and find out more about The High Loves via our mini-interview.

Hello there! This is Noah and I’ll be speaking on behalf of my band The High Loves. We’re a five-piece indie pop-rock band from Toronto and it’s been said that our music is the sonic equivalent of waking up in a good mood – a tight blend of danceable hooks, soaring vocals, guitar that heals as it squeals, and 80s-authentic synth, knotted together in an addictive, unstoppable march. We’ve been a band since 2018, however, due to Covid we’ve undergone a lineup change and recently added the incomparable talents of Jaden Spanier on drums, Jeremy Ugro on keys and Jake St. Jean on bass. Since the reformation of the band we’ve gone into the studio and recorded our brand new Ep entitled “Too Much of a Good Thing”, set to release this Friday, September 10th.

Tell us about the recording process behind “Sometime”?

The song started as a home demo that Jeremy and I made, which had most of the parts already solidified. When covid lightened up in Toronto we started rehearsing it with the rest of the band to flesh everything out and that’s when the song really came to life. Next, we recorded bed tracks one person at a time at our friend River Radcliffe’s home studio where he helped us get some really great driving guitar sounds. Finally, we turned my bedroom into a home studio and then tracked the vocals there.

Elise Mariah sings backup on the track – how did you come to collaborate with her?

I met Elise through our previous drummer and good friend Mathieu Landry. Mat is friends with Elise and studied music with her at Ryerson University. The High Loves played a showcase at the University in 2019 where she saw us perform and I got to chatting with her about the music she liked and found out that she had a love for old school rock and roll. When I was writing “Sometime” and came up with the harmony part for the chorus I thought right away that her voice would fit the part perfectly! I showed Elise the song and she loved it right away and said that she would be happy to collaborate. Elise is an incredibly talented singer, songwriter and performer, be sure to check out her music and socials!

You’ve got a nice 80s-style musically about the band – fave artist from that era? Who do you still listen to from that time? Who still holds up?

Thank you very much! It’s hard to say because there was just so much good music that came out of the 80s, if I had to pick one artist though it would probably have to be Hall and Oates, all their hits are just too good. During the writing process of our Ep I was listening to The Cars, Hall and Oates, Tears for Fears, ABBA, Duran Duran, New Order, Prince, Madonna, Fleetwood Mac, Phil Collins, and trying to blend those influences with our bands modern indie rock roots to create a more interesting sound for our new Ep. I think that all those artists definitely hold up, they all had so many great songs!

You performed at GRAMMY Week in LA – what’s that like? Best moment?

That was honestly such a great experience. I’ve visited LA a few times before this trip and enjoyed it but I never really got to see the music scene down there as much as I did when we got to perform at GRAMMY week, that’s when I really started to fall in love with LA. We performed at a showcase on Broadway st along with four other awesome indie rock bands, Mmmonika, Tribe Friday and The Dumes, and Rose Coloured World (I would highly recommend checking out all four bands). I think the best moment was probably having Corey Feldman introduce us, I’ve always been a big fan of the Goonies so when he walked out as the surprise host it blew my mind a little bit haha.