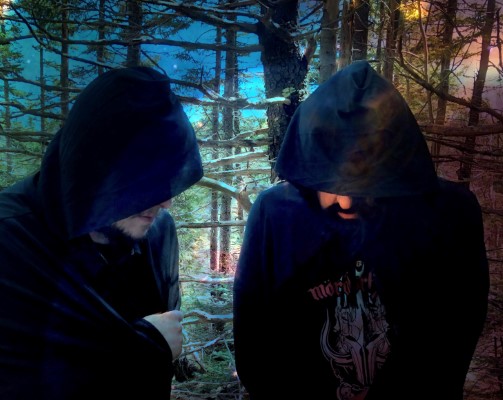 Heavily influenced by nature and the bleak climate they are surrounded by in the cold frozen north, the band is also inspired by sci-fi fiction, one series, in particular, is Stargate SG-1, which inspired their latest lyric video for the chilling “Ice Throne”.

“This one is inspired by the technologies of the ancients left behind in the Arctic and discovered by the Stargate SG-1 team. It’s fairly self-descriptive and a fan of the show would recognize some of the ideas.” adds the band.

Check out “Ice Throne” below, and find out more about Artach via our Five Questions With segment.

Hey metallers, Sruthán here from Artach. I play the guitar and bass for the band. Fíochmhar is the band’s drummer/vocalist. We are based in St. John’s, Newfoundland, Canada and we play epic black metal! As stated in the bio, with us being from the foggiest, snowiest, wettest, windiest, and gloomiest capital city in Canada, one should not be surprised that this fuels the creation of Black Metal. Our main inspiration comes from the land, nature, the bleak weather of the Canadian North, and influential black metal bands.

We formed in 2019 and our debut album “Chronicles of a Black Winter” was released digitally in February 2020 and later unleashed on physical CD by Depressive Illusions Records. The full length contained 9 songs of extreme, harsh, and haunting sounds, which included a cover of Celtic Frost’s ‘Jewel Throne’. Now in 2021, we are returning with our second full-length album, “Sworn To Avenge”. The album will be available June 25th, 2021 from streaming services, our Bandcamp page, and in physical form from Depressive Illusions. We’ve already released a lyric video, have another coming, along with a music video on album release day.

Our music, as mentioned above, has been called “epic black metal” – which to me means the riffs are EPIC, they contain melody, aggression, and variation in tempos so it’s not all blasting but contains elements of thrash, doom, death metal, punk, traditional metal, etc…all enveloped in our black metal style. As for writing style, I typically compose the basics of the song and structure it at home. Ideas are bounced off of Fíochmhar for feedback, then we get together and play through the song a few times and record it then and there. This keeps it feeling raw, fresh, and at times almost unhinged. We have come up with some songs or parts together, but those haven’t been the norm for us so far. We both write the lyrics. Typically I have a topical idea and some stuff along to Fíochmhar who then works his magic and adds to it until it’s complete.

Well, we wrote and recorded most of this album during the pandemic, so I think we’ve been keeping creative. Some lock-downs slowed progress for getting together to record stuff. I didn’t want to write songs about the pandemic, but some small ideas found their way in there but only minimally. Being at home more also helped with more guitar playing and coming up with stuff, so that was a positive.

From the first album maybe “Leviathan…Rise!” and from the new one perhaps “Shimmer”. There are songs I like more than others, but I do like them all otherwise we wouldn’t have recorded them.

Sacrifice! Even tho they are well overdue for a new album, they always come to the top of my list for Canadian metal. Love them so much! Of course, gotta add Annihilator in here, Into Eternity, Infernal Majesty, VoiVod, Unleash the Archers, and just to throw you for a loop, even good ole Platinum Blonde. I could list more, but these came to mind immediately.