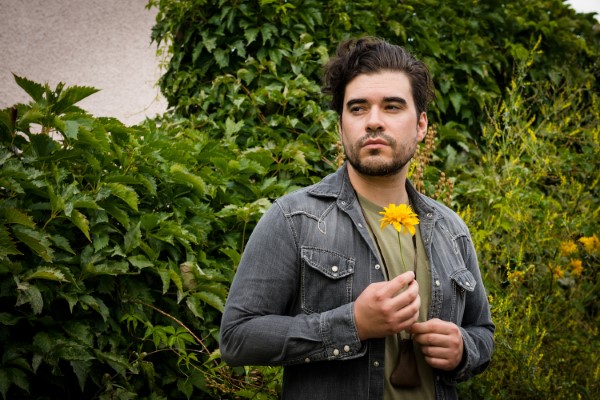 The album release comes on the heels of Electric Religious’ recent nomination for “Métis Artist of the Year” at the 2021 Summer Solstice Indigenous Music Awards. The album’s second single, “One More Night,” earned an Honorable Mention for “Best Music Video” in the June 2021 International Music Video Awards.

He has also performed for audiences as large as 50,000 during the opening ceremonies for Red Bull Crashed Ice 2015 in Edmonton, which was broadcast to over 1.7 million viewers over network television and live YouTube streams.

The debut Electric Religious album, Yeah, Yeah, No (2018) featured the single “Revolution,” which achieved a coveted spot in the CBC Searchlight Top 100 in 2019, and spent multiple weeks at #1 on the Indigenous Music Countdown.

“Tragic Lover sounds like a collection of personalities; every single song has its own character that ranges from softer piano-laced melodies to aggressive, guitar-driven strains. My music is influenced by all types of things – as long as there is truth, love, and honesty,” Baker said.

Although Tragic Lover is non-traditional Indigenous music, Baker says the record reflects a rediscovery of what the Métis culture means to him. Baker grew up in Prince Albert, Saskatchewan, surrounded by Indigenous family and friends, but with little Métis culture practiced in his home. This all changed when his brother Nathaniel got his first violin. Baker started playing guitar to accompany his brother and together, they learned to play traditional Métis songs.

Over the past few years, Baker has further immersed himself into his Métis ancestry, culture, and teachings. These experiences and the current climate around Indigenous people largely informed his writing for the new record, which spanned a two-year process. The result is an honest and intuitive collaboration between Electric Religious, the band, and producers.

Check out the latest single, “Paralyzed” below, and find out what Electric Religious had to say about the album.

How does it feel to be releasing your second album?

It’s a bit surreal to release an album during a global pandemic, honestly. On one hand, with the closure of performance venues over the past year, I haven’t been performing, so I’ve had the time to work on supporting the release to the best of my ability. On the other hand, there’s a sense of risk to releasing it now. Will we be able to tour in support of the record? Will our audience feel comfortable coming out to shows? We’re doing this release completely independently, and so I want to thank all of the mentors that have worked with me, or had Zoom meetings and provided all kinds of valuable advice. I feel honoured to be able to provide folks with an album full of honesty, love, and connection in a time when we all need it. Big thank you’s to the team at Velveteen Music, Crystal Baby Music, Encore Graphics, Jay Procktor, the band: Olivia, Luke, and Reid. Reuben Ghose, CMI, DMMI, Auteur Research, Different Sauce, Antiskeptic Entertainment, Subculture Media, and Susan Busse. Couldn’t have done it without everyone involved.

What makes this album different than your first album?

Well, first of all, not every song is about a girl. Ha. I write songs as a form of healing, whether that be healing from a proverbial bruised knee, or a traumatic soul-wound. Each song has its own message that I try to use to remind myself that I’m ok. With this record, however, I wrote songs to attempt to heal a wound I couldn’t quite see. This album’s central themes are about displacement and never really feeling like you have a “home” even though you might have four walls around you and a roof over your head. When I was on tour in 2019, one of our tour stops was at Métis Crossing at Smoky Lake, Alberta. The archivists there have done a lot of work to record the history of the Métis people that lived across Alberta and Saskatchewan around the turn of the century, and to document their story of essentially being decimated by the loss of the bison and their traditional ways of living. Although my music isn’t traditional-sounding Indigenous music, I try to communicate my experience of being a modern Indigenous person living between two worlds.

I’m interested in the concept of intergenerational trauma, which I have seen play out in my own life and the lives of my family members. You’re born with a wound, and it’s like you unknowingly begin your life in a triage state. People try all sorts of inventive things to stop the bleeding, trying to fill a hole or numb that pain with whatever they have available. It doesn’t always work, so we have a lot of walking wounded. That’s where the album title, Tragic Lover came from, this feeling of being doomed before you start, born under a bad sign… and yet having this fire inside you that won’t be extinguished.

Do you have a favourite?

The leading single, “Catherine,” is an important song to me, because it encapsulates the way that being raised Catholic has affected my life. “Catherine,” is based on the historical figure, Kateri Tekakwitha (which is Mohawk for Catherine,) a 17-th Century Mohawk woman who was later canonized by the Catholic church. Some praised her canonization as a way to promote Truth & Reconciliation, while others say it represents some of the worst aspects of colonialism. Kateri is also the focus of Part One of Leonard Cohen’s novel, Beautiful Losers, In where the narrator expounds on his love for this largely unknown woman from history. I took that perspective and made it my own, and applied it to my love, pride, and hope for all my relations. It is an urban prayer that draws Cohen’s version of Catherine Tekakwitha together with the contemporary struggle of Indigenous people in urban western Canada, where I live.

How did the current climate around Indigenous people influence your writing for the new record?

I think I just want to inform the listener that reclaiming culture, language, and our own personal Indigeneity is a slow process. Baby steps that often come with some sacrifice. Trying to let go of my past, trying to be more flexible in my thought patterns, trying to become more humble and kind, and allowing myself to reconnect with nature and the higher power that I feel all around me, have been my goals these past couple of years and throughout the process of making Tragic Lover. Non-Indigenous people need to understand that some things are unquantifiable when it comes to ways forward towards reconciliation. There is no straight line to get there because the Indigenous Peoples of the modern world have lost so much. I don’t know what I need to heal, because of the loss of my culture, I don’t even know what I’m missing. The enlightenment that comes with healing all aspects of ourselves is still far away. And so if Indigenous Peoples are free to heal, free to access our lands and resources, to speak in our languages, and be given the space to learn and reclaim our cultures, that’s when we’ll be closer to achieving a brighter future for everyone on Turtle Island.

On this new record, that reality is why I chose to write about the painfully subtle ways that intergenerational trauma has played out in the way I interact with the world around me, from how I dealt with my relationship with alcohol, to the self-conscious ways I look at myself, and the relationships I have with those around me. It all comes down to an old way of living surviving in a fast-paced, modern world.

What is your hope for the album’s reception?

There are a lot of things I’m proud of about Tragic Lover. I worked super hard on finding my voice on my primary instrument, the guitar. I can say things on my instrument, or convey certain emotions and feelings through sound, easier than I can do with words, and so allowing myself the space on this record to do so was important to me. I am proud of the collaborative nature Brad Simons, the producer of Tragic Lover, and the team at Velveteen Music in Edmonton, AB settled into while making this record, too. Some of my favourite parts of the record are contributions made by the team there. I put 100% trust in the band, and I think this record shows a lot of everyone’s personality. I dug deep in writing the lyrics, and I hope that there are some messages that folks can take away to help with their own interactions with the world. Ultimately, I hope that whether you need this musical medicine as a soundtrack to your road trip, or as time to sit and reflect, that it provides happiness to everyone who listens to it. Tapwewin.