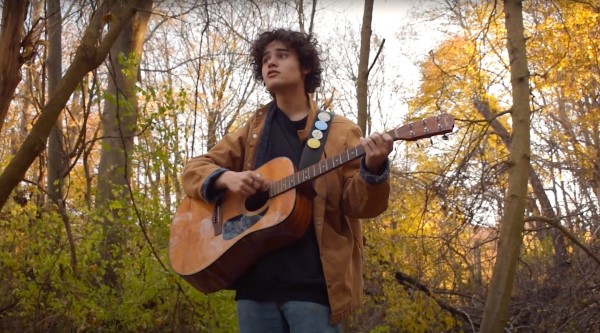 On August 21, 2021, budding indie rock band, Spoon Bend, released their eponymous debut album and it holds the new psychedelic-blues fusion sound rock fans have been waiting for. Spoon Bend introduces a record containing 10 melodious tunes created with the intention of providing a positive and relaxed experience for listeners.

Spoon Bend is a small Toronto-based band comprised of four distinct artists. The band formed in 2019 and have since developed their signature laid-back, eclectic, guitar-heavy sound which this album pays tremendous heed to.

Spoon Bend combines classic bluesy guitar riffs with progressive techniques in an incredibly easy and carefree way. The album begins with the lead-off track, “Dance” which strongly showcases the spirit of the album and eases listeners into the succeeding tunes in an effortless manner. “Dance” introduces frontman, Yuuya Cook’s honeyed vocals in concurrence with a simple mellifluous melody carried by bandmates Jack Florio (bass, vocals), Ami Kobayashi (guitar), and Thomas Sylvaggio (drums). This track also succeeds in setting forth the album’s sincere lyricism which, together with the instrumental arrangements, creates this wonderful sense of chilled freedom for those listening.

Spoon Bend continues into “What’s On Your Mind” and “Pictures” which expands on the sounds appreciated within the first track and contributes to building the overall atmosphere of the album. We then hit “Bedroom Rain” which could easily be described as a musical trance-like intermission. The name lends itself to the melody as it’s like falling asleep to the sound of light rain within the comforts of your bedroom. This feeds into the midpoint of the album with “Melancholy Dreams” and “Magnetism”, a couple of uplifting songs as equally well-thought-out as the lead-up-to.

With track 7,  “Intermission”, we hear Cook’s vocals in a more isolated manner which allows for an unobstructed view into the raw frankness of the lyrics. The song offers perhaps a more negative outlook on the subject matter, but the melody running parallel really carries listeners through its honest emotion. “Intermission” shares this sentiment with its successor “Brand New Shoes”, which begins with this upbeat, ever catchy rhythm and blues-inspired arrangement until the outro sounds a somber finish. This lands us on “Sunlight”, the track I’m most excited to highlight and what I believe to be the band’s most defining effort.  Sunlight is a sublime collage of the music that inspired the band’s songster, Yuuya Cook, to create music. Cook comments:

“Our music is like a lot of old classic rock (Hendrix, Beatles, Led Zeppelin) and their instrumentation adapted into a more modern sound. On the other hand I’ve always respected the merits of simple pop music that has no other purpose but to sound good. I’ve always felt Bahamas fills the role of music that is just simple and sounds good – it doesn’t try to be too complicated or seem above thou, it’s just simple and doesn’t feel like too much… I’m inspired by all music I hear in one way or another.”

Similar to the man of music, Jimi Hendrix, the melodies of Sunlight speak as if they are being sung and the lyrics are just a derivative of the feel. Put simply, “Sunlight” is just a kick-ass song. Spoon Bend is completed with Thank You, a gracious farewell which truly just showcases the band’s enthusiasm and gratitude for music and those who have listened to theirs.

Spoon Bend is an incredibly exciting feat for such young artists which only becomes more impressive upon learning that it was produced, recorded, and mixed in its entirety by the band itself.  The album is subtle but it contains a lot of soul, spirit, and mysticality.

Being so early in their musical careers, no doubt Spoon Bend will continue to evolve and develop their sound but this is a promising journey fans of their music will one day be proud of for sticking with them from the very beginning.