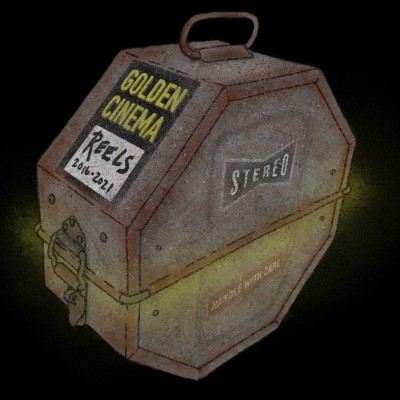 The latest collection from Golden Cinema is a little bit old, a little bit new, and a whole lot enjoyable. Reels (2016-2021) unites songs from the band’s previous EPs, along with fresh ditties “Little Sunscreen,” as featured on CBC Music’s Top 20, and “Dead Ringer,” whose opening mischievous guitar riff and rhythm build to a powerful pop-rock hook of a chorus that sets the tone for what to expect throughout the rest of the album.

Collectively, members of the group have played as part of Arkells, Two Hours Traffic, and North Lakes, and you can hear a bit of all of these bands in the music. Their sound recalls iconic Canadian rock around the turn of the millennium. Redolent at times of early Yukon Blonde (e.g., “Colour Me In”), at others of the likes of Sloan or Joel Plaskett, Golden Cinema have a proclivity for balancing thudding beats and distorted solos with pleasurable melody. Compare, for instance, the sometimes borderline bedlam of “Nostalgia” against the more clean and subdued “Peachy Keen,” or turn to the ardently buoyant “Sunset Holiday” which straddles a line more in between. Each is catchy regardless of its own variety; hell, every track on the album has that in common.

Of additional note, Reels (2016-2021) marks Golden Cinema’s first physically available release. So if you’re like me and love some tangibility to your music, you will want to check that out!