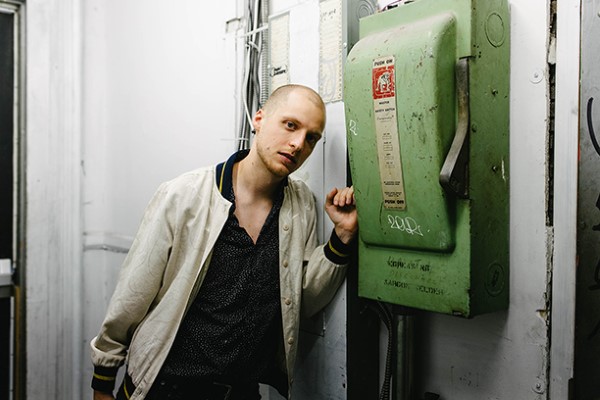 Toronto, ON-based psych-rocker, Rise Carmine (aka Liam Colbert) is back with his latest single, “Be The Only One”.

The track is the latest to land ahead of his forthcoming debut, No Coup For Anyone. The release’s GRAMMY-winning powerhouse producer Dave Schiffman’s (Weezer, PUP, Vampire Weekend) craftsmanship is on full display: a tightly woven intro, a crushing hook, and a sizzling fade, magnificently mingled with frontman Liam Colbert’s smart lyrics, and incendiary vox.

“Be The Only One” is a staring competition; look away and you might miss what’s to come next from the full EP.

Check out “Be The Only One” below, and find out more about Rise Carmine via our mini-interview.

I’m Liam Colbert, AKA Rise Carmine, a psych-rock multi-instrumentalist from Toronto. I have been studying and playing music my whole life.  You can hear in my music the influences of 70s classic rock and more contemporary psychedelic music and alternative rock; think bands like Thin Lizzy, Led Zeppelin, and Aerosmith meets Tame Impala, Unknown Mortal Orchestra, and White Reaper. In 2017 I recorded and self-released an album from my parent’s basement, under the name Patiohawk. My band was playing shows in Toronto, southern Ontario, Quebec, and the Maritimes until the pandemic.

Since the lockdowns I re-focused my creative energy. I wrote and recorded new music. The first EP is set to be released this fall under my new name Rise Carmine.

Tell us about the recording process behind “Be The Only One”?

When the pandemic first hit and I was let go from my job as a bartender, I sat in my room for two months and recorded a ton of demos. I didn’t know Dave Schiffman personally, but I knew he worked with some of my favorite Toronto bands like PUP and The OBGMs. I sent him the demos hoping he’d be interested in producing them. Be The Only One was the last song in a list of about 15 that I sent to him.  When he got back to me he said we definitely had to record it. So we did! He came up to Toronto from LA and we recorded 5 songs in about a week at Dreamhouse Studios in downtown Toronto. They weren’t your typical studio sessions, we wore masks the entire time unless I was singing, and there was no hanging out at the bar afterward, but we still had fun.

What’s it like being a musician during the pandemic?

I’m not going to say it’s been the worst thing for me. As a creator who loves a healthy dose of solitude and loves to sit in a room alone and write and record music, there were parts of the pandemic that were ideal. I think the lifestyle was actually pretty well suited to someone like me. But even I can only do that for so long. Once you have had a chance to sit down and write, you want to be able to share that music with an audience. So it’s been lonely for sure. But the experience has really solidified my love of playing on stage because once I wasn’t able to do it anymore, I realized how much the stage felt like home.

I think the main hope for most musicians in 2021 is to play a show and get back on stage. It’s baby steps for now as things open up. I’ll be releasing the EP of songs that I recorded with Dave Schiffman in the late fall. Heading into the new year I’d like to be playing festivals in summer 2022  and hopefully going out on the road to play a tour later in the year. But in the short term, I would say I’m eager to get back on stage to play in front of real people again. There’s only so much feedback you can get playing in your living room.

I’d love to collaborate with Ruban Nielson of Unknown Mortal Orchestra. You can tell he has a really interesting way of hearing and writing music.  I gravitate toward musicians who do it all themselves, from the writing to the producing to the recording and even mixing of their own music. It really feels like a pure and unfiltered creation coming straight from the source, and I really admire that. He also has a unique process of using reel-to-reel tape machines to get amazing saturated, crunchy tones that sound like nobody else. I would love to be in the room and watch him work.