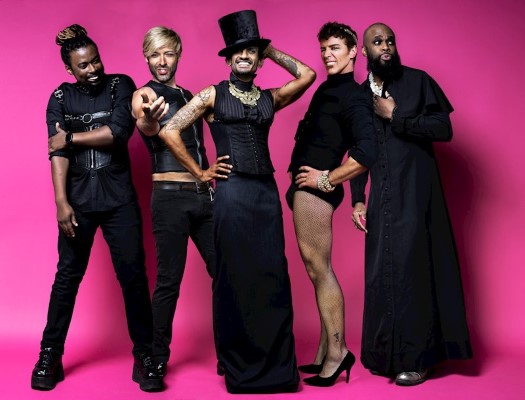 One of the things that have kept people positive over the past many months is reminiscing on simpler times. Toronto’s MANifesto is feeding the continuous cravings for nostalgia on their debut album Pinky Swear; 12 carefully chosen girl group covers spanning over 7 decades and including songs originally done by En Vogue, The Supremes, and Spice Girls, to name a few.

This project is unlike anything else out there right now, but so needed in this nostalgia-obsessed world! In a nutshell, where did the concept come from? How did the group come together?

Dionisio – MANifesto is the brainchild of Kelly’s love for the girl group. We came together through our community. Friends of friends. We didn’t know each other before the project started. Now we are a tribe. Joined in sisterhood, a band of brothers.

Kelly – I always wanted to be in Bananarama. That’s all.

You touch on some of the best of the best in girl groups to cover on Pinky Swear; was it difficult to narrow it down to a dozen tracks? Any left over for future projects?

Icarus – Definitely! Girl groups are not all created equal and they are close to our hearts to varying degrees. There were many heated discussions not just on the groups we wanted to showcase but also which songs would be featured. I feel that the songs that we decided on Pinky Swear are very representative of the songs that we all love and which would be fun to perform for audiences. Oh there are so many other songs that we wanted to cover and maybe they will be included in future projects. These songs are too much fun not to sing.

Twaine – Kelly asked an early iteration of the group for their suggestions/preferences and we were able to whittle them down to the twelve on the upcoming album. That means, though, there were some we didn’t get to use which could definitely be used in the future.

Dionisio – It took some time to narrow down to a dozen. There are so many great songs out there we would like to reimagine. We’re definitely in the works for more.

Kelly – We tried to balance decade and country of origin to present a full spectrum. We have songs from the 50s thru to the 90s, one from the 00s and one from the 10s.  I recall a rehearsal where Twaine was *loving* diving into  Not That Kinda Girl (Fifth Harmony)… this was also the same rehearsal we tried Robert DeNiro’s Waiting (Bananarama) for the first time and all collectively went….. at the end 😉

The “press conference” for the album was so unique with incorporating the best of the best in talk shows past. Who came up with the idea for it?

Kelly – I wanted Joan to interview us from the grave but her people said No.

For the album, you’ve teamed up with Rainbow Railroad, an organization helping bring visibility and fundraising to the most disenfranchised of the global Queer Population. How did that collaboration come to be? What are your biggest goals in teaming up with them?

Brayo – Am one of the few lucky beneficiaries of Rainbow Railroad, Having been a victim of persecution from my home country Uganda (East Africa), my life was in danger and Rainbow Railroad was able to get me a ticket and safe passage to Toronto. There are many LGBTQIA+ suffering in different countries that still criminalise homosexuality and they have no way out to saftey. We believe supporting the Rainbow Railroad would increase their capacity to be able to help our people out there. I would not be here performing with this amazing group of Gay Men if it was not for Rainbow Railroad, God Knows I would not even be alive. Thats why, MANifesto agreed to do whatever we can, however small the contribution, to at least save someone’s life.

Twaine – …releasing a video or two, which are a blast to record, and will showcase more of our unique takes on these songs.

Dionisio – We will be working hard to get our stage performance in the pocket for next year. Me personally..Dance lessons lol. I’ve really struggled with the dance component of MANifesto but it’s been so fulfilling. Looking forward to getting out and hitting a stage.