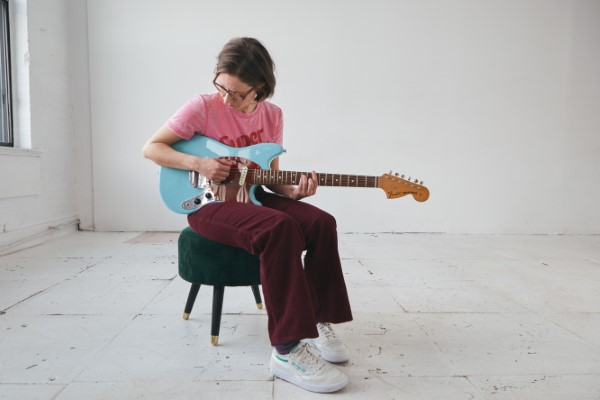 The 5-track release is composed of sensitive alt-folk tracks. The artist has made a name for herself over the years with her music and her numerous collaborations, either as a producer and sound engineer, or as a bassist, guitarist, and backing singer for artists such as Maude Audet, Catherine Leduc, Willows, and Navet Confit.

Check it out below, and find out more about Émilie via our Five Questions With segment.

I’m a musician, singer-songwriter, and producer based in Montreal. I take part in many projects but my main thing is to record dream-folk music under my own name. I’ve been doing this since 2007 and I’m releasing my fifth album/EP this month.

I tend to describe my songs as downtempo rock-infused dream-folk poems. I like to reference tones, moods, and riffs that bring us back to the 70s, 80s, and 90s — often all at once. My music is about memory, impressions, sensations, interplay, and textures. It’s also influenced by literature, by our shared humanity, as well as by my states of mind and latest adventures in life.

This slow-motion version of life — having more time to read, write and geek out about equipment and sounds — influenced my creative work, indeed. While being packaged as a folk-rock track, the song Slalom is pretty much a poem about repetition, finding balance between keeping on and letting go in a (literal as well as figurative) confined space.

La nuit, les échos. I think it encapsulates the mood and meaning of this project pretty well.

My favorite current Canadian band is The Weather Station. I’ve been a fan since their first albums and I feel like we share similar sensibilities, which can be felt and observed through our music. I also really like Kathleen Edwards, Daniel Romano, Lisa Leblanc, Salomé Leclerc, and, of course, Joni… I still listen to Hejira on a regular. It’s one of my favorite albums of all time.