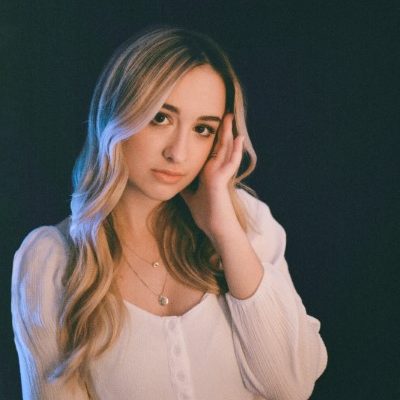 Alt-pop artist, Allegra Jordyn has unveiled her new single, “Talk of the Town”, along with a music video to accompany the release.

The Toronto native sings about feeling unimportant and of being neglected by someone.

“I wrote it about somebody who was garnering so much attention from everybody around them, and I started to feel like my attention wouldn’t make any difference in their life if they had so much of it already,” states Jordyn.

The relatable lyrics paired with ghostly echoes set the stage for an emotional and raw, yet danceable track. The constant hunt for someone’s attention can be tiring, especially when it’s not valued or appreciated, which is what Allegra Jordyn preaches in the song. From the pop harmonies to the firm and declaring lyrics, “Talk of the Town” is a track anyone can listen to while vibing alone or with those who share the same feeling.

“I held onto the song for years until I found someone who shared my vision for it. The way it is now is exactly how I heard it, but I had no way of explaining it to somebody else,” she explains.

The single, which was produced and mixed by Chris Grey and mastered by Reuben Ghose is ultimately an anthem for the givers out there to feel less alone and also learn when to set boundaries and say, “enough.”

Check out “Talk of the Town” below, and find out more about Allegra via our Five Questions With segment.

Hey, I’m Allegra Jordyn! I’m a Toronto-based, 19-year-old pop artist. I’ve been making music literally my entire life and I’ve spent years trying to develop both as a person and an artist and create what feels right. I released my first single at 14 and my debut EP at 16, however, I didn’t resonate with the sound of music I was making and I didn’t feel like I was reflecting my personality or demonstrating my full potential. Earlier this year, I took down all my old music and started releasing music I genuinely love with my whole entire being and now you get to hear it all!

My new music has been primarily electro-pop, but I definitely pull influence from a lot of genres. I’ve always focused really heavily on crafting detailed stories when writing and I put a lot of thought into my lyrics, but I’ve also really been loving experimenting with unique sounds and production this year. The upcoming EP I’ve been working on has been so fun because it’s a very diverse project, and every song really stands alone and fulfills its own role on the EP. There are fun, dance-pop tracks like “Numb”, darker and more alternative tracks with pads and vocoders and a million harmonies like in “Talk of The Town,” and a variety of other sounds that you’ll get to hear soon!

The pandemic has actually really helped my creativity. Just before it all, I was living in Boston for school where I found myself struggling a lot to create. Moving back home to Toronto last year really helped to reinspire me and give me the time and space to focus on my music. At the end of 2020, I started recording again and we’ve been filming music videos and capturing visuals for all my songs this year as well. Music has really kept me motivated and inspired through the mess of the last year.

“Talk of The Town!” It’s my favourite song I’ve ever released and producing it was the coolest experience ever. I held onto the song for a really long time and waited to record and release it until I could find somebody who truly understood my vision for it. My producer, Chris Grey, understood exactly what I wanted it to sound like and made it better than I could’ve ever imagined! It’s just so unique and different and crazy, but it just feels so much like me in a song.

I’m a big fan of Lennon Stella and JP Saxe. They are both incredible songwriters, unique vocalists, and have so much honesty and authenticity in what they create which I respect so much!