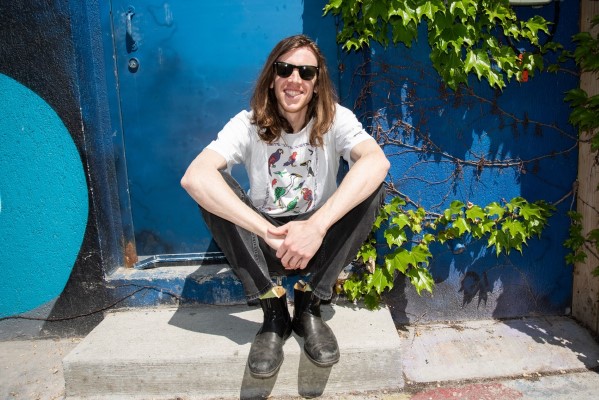 Tokyo Police Club frontman Dave Monks keeps pushing the summer vibes with his latest single “Don’t Get Pushed Around,” featuring acclaimed rapper Shad. The track is featured on Monks’ upcoming sophomore solo LP, I’ve Always Wanted To Be Me, out October 15 via his own newly launched Ghost Pepper Records.

Discussing working with Shad on the track, Dave noted,

“Shad happened to be mixing his record next door to where I was recording. We asked him to come check out a track for a feature, and it just clicked. His string of heartfelt words really makes my one-liner, Don’t Get Pushed Around’, and is the kind of casual collaboration you hear about but never think will ever happen to you.”

As the album title suggests, I’ve Always Wanted To Be Me is Dave being open and honest with both himself and his audience, exploring music with wild enthusiasm, unafraid to go in new directions, to previously explored places.

Regarding the album, Monks added,

“If you’re like me, then you’re never quite the same person from one day to the next. Your personality is more of an ever-changing kaleidoscope of ‘yous’ than something set in stone. I’ve embraced that for myself with this album of unlikely outliers, who are stylistically all over the map, but find a weird cohesion in their differentness. There’s so much exciting new territory in it and releasing it feels like turning a new page.

I’ve never been the sci-fi post-punker from TPC or the steel-string troubadour from my early solo records. If I was, I think my creative energy would have died out. It keeps renewing itself though because I’m someone who’s always excited about a new direction. For me this album and the sum of its parts are a discovery of that bigger and truer sense of “me”. The title which came from a dream and stuck, could be my charmed reaction upon realizing that. Like I’ve just heard the final masters and blurt out, “Well, good! I’ve always wanted to be me!”