Home / Festivals & Events / OSHEAGA release their full Get Together lineup!

OSHEAGA release their full Get Together lineup!

The nation’s top emerging talent has been assembled for the OSHEAGA Get Together this fall, and the music emanating from Parc Jean-Drapeau between October 1 and 3 will be the unmistakable new sound of Canada.

True to form, the OSHEAGA team has put together an incredible array of top tier talent to lead festival-goers on a journey of musical discovery on Montreal’s stunning Île Sainte-Hélène for three magical days, including already-announced headliners Charlotte Cardin whose debut album, Phoenix, is among the top critically acclaimed Canadian albums of the year; Jessie Reyez, who is finally making her triumphant debut at OSHEAGA; and Montreal’s Half Moon Run, a true festival favourite, who have become one of this city’s most celebrated exports on the strength of their unforgettable live performances!

“We are so excited to be able to get together with the fans and the artists on the island this year! It has always been a priority for us to support Canadian talent, and putting together this OSHEAGA Get Together event has given us an opportunity to showcase the best new artists this country has to offer alongside true festival favourites!” 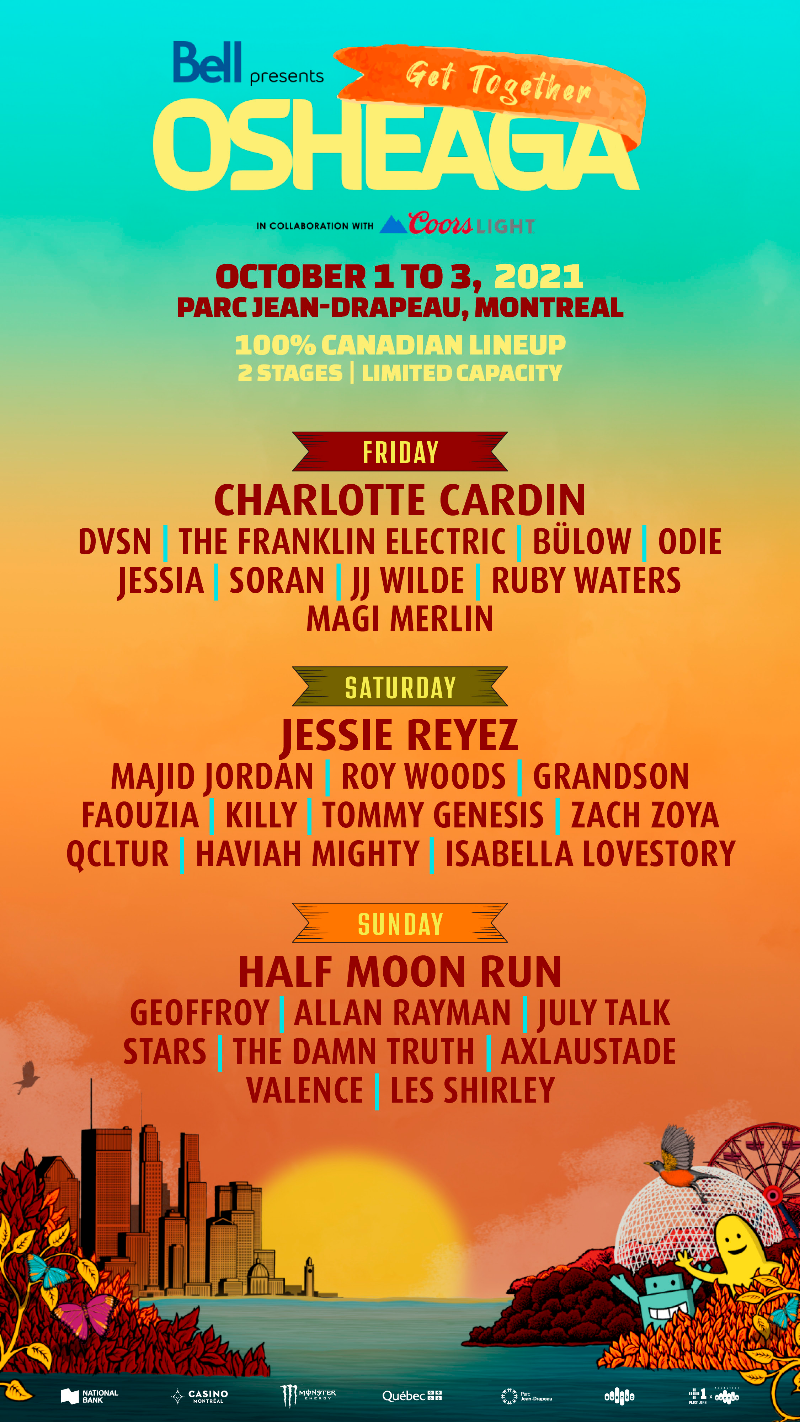 The OSHEAGA Get Together will be an eclectic affair featuring some of the best new hip hop and R&B with acts like Majid Jordan, the Toronto duo signed to OVO, whose synth-pop hits include collaborations with the likes of Khalid, Partynextdoor, and labelmate Drake; Roy Wood$ – also a Drizzy collaborator (their duet, Drama, has over 300 million streams on Spotify) – and Killy, also from Toronto, will up the hip-hop ante, while Toronto’s R&B duo DVSN will be on hand, as well as Odie, the man behind dreamy hits like North Face and Slowly, will bring his slow burn vibe and his unique style which has been described as part Fela Kuti, part Coldplay, and part Kid Cudi.

True to its indie roots, the OSHEAGA Get Together will also feature established festival favourites like Montreal’s The Franklin Electric, who have a brand new album due in late September; indie rock royalty Stars, who have made four OSHEAGA appearances over the years; representing the pure rock sound is Montreal’s The Damn Truth, fresh off working with legendary producer Bob Rock (Metallica, Mötley Crüe, Bon Jovi, Aerosmith, The Tragically Hip) on their newest release, Now or Nowhere; and Toronto’s July Talk will no doubt deliver one of their explosive live sets, pushing and pulling the audience into a state of pure joy. Fans of ferocious riffs can expect fire from Kitchener’s JJ Wilde, who just won Rock Album of the Year for Ruthless at the 2021 Juno Awards, making her the first woman to win the award since Alanis Morissette won in 1996; and Les Shirley, Montreal’s punk queens will fill the festival air with plenty of rock and roll swagger.

When it comes to perfectly crafted pop, Winnipeg’s Faouzia will prove why the Moroccan-born singer, who released the hugely successful track Minefields with John Legend last year, has had so much impact, with 3 million monthly listeners on Spotify; Canadian pop star Bülow, who won Breakthrough Artist of the Year at the 2019 Juno Awards, will be bringing her signature electro-pop jams like the massive hit Sweet Little Lies to OSHEAGA Get Together; Jessia is a force of nature from Vancouver, whose personal empowerment anthem, I’m Not Pretty, has generated close to 80 million streams on Spotify; while Montreal’s new pop sensation, Soran, is a bonafide TikTok superstar with a bright future and major label heft behind him.

On the more eclectic side of things, McGill graduate, Jordan Edward Benjamin, better known as grandson, will crank up the intensity, infusing some fuzzy indie rock vibes into the lineup – the winner of SOCAN Songwriting Prize for his song Blood // Water made waves recently with his contributions to the Suicide Squad Soundtrack, including his duet with Saturday’s headliner Jessie Reyez – he’ll be onhand along with artists like Isabella Lovestory, and the rough reggae of riddims Polaris Prize winner Haviah Mighty.

Quebec acts will have an important presence as well, with singer/songwriter/multi-instrumentalist Geoffroy, whose funky alt-pop sound has made him one of the most exciting young acts to emerge from the new vanguard, as well as the grand prize winner of the Francouvertes 2020, Valence, from Saint-Sauveur, who has won over fans with a breezy art rock sound, plus Zach Zoya, the Rouyn-Noranda-born rapper signed to one of Quebec’s biggest rap record label, 7ième Ciel.

The #1 priority for the OSHEAGA team is the safety of all attendees, artists and staff while providing an optimal festival experience for everyone on site. Therefore, the OSHEAGA Get Together event will follow all government recommendations and COVID-19 health and safety measures. The team is working relentlessly on finalizing the health and safety plan according to the most recent government announcements – all on-site measures and guidelines will be communicated clearly at the beginning of September.

OSHEAGA Get Together will be taking place October 1-3 2021 at Jean Drapeau Parc in Montreal, QC. For more information and tickets, visit osheaga.com.