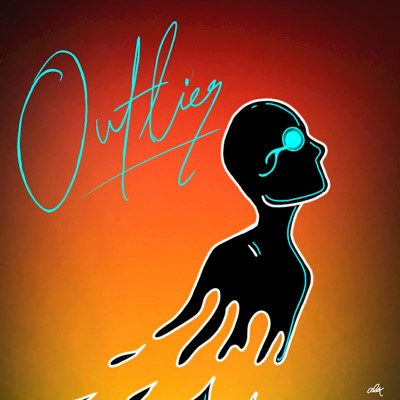 Newfoundland and Labrador’s Dan Glover has released his latest album, Where Are We Now? under the moniker Outlier.

The 10-track jangle pop meets contemporary rock LP is an amalgamation of the joy and sorrow Dan has experienced in the past few years. And it radiates honesty. This is a guy who isn’t afraid to wear his heart on his sleeve and share a snapshot into his life with his listeners.

“The title ‘Where Are We Now?’ is from a conversation I had with my father. I am dealing with things that happened with him and with my estranged daughter in the past couple of years that are in emotional spots in my mind,” Dan says.

Dan recorded his first album in Whonnok, B.C. at Scott Smith’s (of Loverboy) ranch in 1998 that got positive reviews from the Vancouver Sun and the Georgia Strait. He went to university and returned to Newfoundland in 2004 after graduating. In 2007 he recorded a demo with Josh Ward of Hey Rosetta! on bass. He formed the band Outliers with Adam Burke and Laura Delahunty in 2016. They recorded and released “Outliers: Event Horizon”  on July 22, 2016, the day he got married to Marlene.

After Outliers called it quits, Dan decided to go solo as Outlier. Where Are We Now? should be considered his breakout album.

Check out the album below, and find out more about Outlier via our Five Questions With segment.

I’m Dan Glover (a.k.a. Outlier), I released a new album “Where Are We Now?” on July 22, 2021. This is my fourth album. I provided main and backup vocals on all four. I’ve progressed from having a guitar player/producer (Kenny “Kaos” Loney) do most of the music (album: Danny Glover – Head in the Clouds) to producing one myself with friends from high school in 2011, a bass player and drummer (2Y0 (self-titled)) to playing guitars, bass and keys with a drummer and keyboard player in 2016 on Outliers (album: Event Horizon)) to now doing basically everything myself except mastering, photos, artwork, and promotion. I’ve gigged around, mostly playing covers (that’s what gets you the gig) but with this one, I am going to be focusing more on open mic nights for now until I can get more of a following and hopefully be booked for some bigger gigs.

There’s always this question “what genre are you”? I like that some people have chosen Jangle pop, I didn’t know what that was but I had Gin Blossoms playing nonstop back in high school so I can see it for sure. Others have called it “retro rock.” You can’t discount influences like Tragically Hip, Pearl Jam, Coldplay, the Police. Often what happens is a melody pops in my head, or a beat/bassline, sometimes a line of a chorus. I try to record that whenever there is something inspirational. Then when I get more time I develop it. I try to get at least a verse and chorus basic melody/chord structure then it is about fitting the lyrics into a theme of something I’m thinking about. Sometimes the words come out and it is totally symbolic and probably no one would think “oh that’s what that was about” but I keep it there. It’s just my brain language. In “Where Are We Now?” I think a lot of the lyrics are more literal for some of the songs, maybe they are more relatable. People like this new set of songs so far.

So, I had the plan to release this on July 22, 2021, which is my fifth wedding anniversary. A couple of years ago I wrote “All My Life (You’ll Be Mine)” and it quickly became the central song. My wife Marlene is like my manager J. Some of the darker ones (Conquer, Catch Me (Ghost)) were written earlier. The pandemic forced me to spend more time writing and recording and in a way really helped me to get this project finished as my day job was slow. Silver linings.

It has to be “All My Life (You’ll Be Mine).” This sort of became a major theme, the album is “Where Are We Now?”, i.e. reflecting on where we are since my last album July 22, 2016 (it was given out to all our wedding guests), the celebration of our five years is a definite major milestone. Some other major events in my life are covered in there, like estrangement from my daughter (Conquer, Catch Me (Ghost)), my Dad living with us for a year (Bread Alone), almost giving up on music (Back from the Brink – also now I count that as relating to the Habs almost winning the cup since I sang it on Facebook for their elimination games and the magic worked (except for Tampa Bay)). But “All My Life (You’ll Be Mine)” has to be the top song for me.