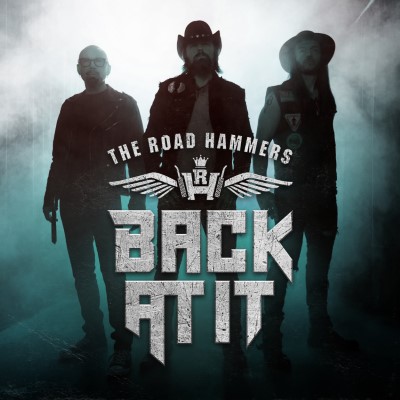 The Road Hammers are an undeniable staple in Canadian country music with over 25 million streams, 8.3 million YouTube views, six Top 10 hits on Canadian country radio, five CCMA awards, and a JUNO. And, this certified Platinum-selling country-rock trio (Jason McCoy, Clayton Bellamy, and Chris Byrne) have executed their irrefutable energy once again, after a two-year hiatus, with the release of their newest EP, Back At It, on August 20. Not surprisingly, The Road Hammers have given their fans some incredible music in these six strong tracks impacted by their southern rock sound.

Back At It was produced by Jeff Coplan, Dan Davidson, Jason McCoy, Clayton Bellamy, and Scott Baggett and mastered by Andrew Mendelson at Georgetown Masters, Nashville, TN, except tracks 1 and 5 which were mastered by David Kalmusky at Addiction Studio, Nashville, TN.

These guys love what they do and it shows with Back At It. This EP reflects who they have always been over the years by staying true to their roots with their country-rock sound but with a bit of a twist. This album is meant to be cranked up to the max to really be enjoyed. It may be only just over 18 minutes in length but that time is classic Road Hammers entertainment at its finest. With this incredible return, The Road Hammers also celebrate the tight-knit Canadian country music community on the EP– a rare thing to do, but something that is so needed at this moment in time.

“I think we all want to get ‘Back at It’ – back to travelling, new adventures and back to live shows! The new EP is classic Hammers with some new twists, packed with some surprise guest appearances. We can’t wait to share this with y’all!”

So, let’s get into this album.

The lead track and first single released, “The Boys Are Back At It,” (written by Deric Ruttan, Jason Blaine, Clayton Bellamy) is the one that wants to get you on your feet and pump your fists – to “turn it up and throw down.”

Watch the video for “The Boys Are Back At It” here.

“All My Friends” (written by Jason McCoy, Clayton Bellamy, Chris Byrne, Dan Davidson) is a collaborative track featuring vocals from Terri Clark, Dan Davidson, Jason Blaine, Cory Marks, Aaron Pritchett, and Gordie Johnson. It’s fun to listen to and very upbeat. You’ll want to “kick it up” and hang out with all your friends to “make some noise” when you hear this one.

“Stay Wild” (written by Jason McCoy, Clayton Bellamy, Chris Byrne, Tim Hicks, Jeff Coplan) features Tim Hicks and is a bit more laid back. The harmonies between Hicks and The Road Hammers are flawless. It’s great to hear Hick’s voice on this track. It’s one that you’ll want to listen to over and over again.

“Down Down Down” (written by (Jason McCoy, Clayton Bellamy, Chris Byrne, Dan Davidson) brings you right back to that southern country rock that the Road Hammers are known for. The banjo playing in the background makes this a classic Road Hammers tune. You can definitely party down to this song.

“Give’r” (written by Jason McCoy, Tim Hicks, Pavel Dovgalyuk) was the track out at country radio on August 10 and it’s 2:32 of pure enjoyment. Kicking up your heels to this one is a must! To hear this one at live performance would just get the crowd taking “it over the top!”

Watch the video for “Give’r” here.

“Hillbilly Disco” (written by Jason McCoy, Clayton Bellamy, Chris Byrne, Jeff Coplan) features Meghan Patrick. This one was released on July 23 and for those of you that lived in the disco era … well … let’s go right back to the ’70s. It’s disco with an updated twist. For those who didn’t, this tune will make you understand why disco was so popular and why the dance floor was always packed!

Back At It is extremely well written and well produced – from the first song to the last. With this EP, The Road Hammers are – “Back, like Evel Knievel; Back, like a Rocky sequel; Back, like The Second Coming; Back in the saddle hit the ground running.” This is one album where it will be hard to pick just one favourite so I believe that you need to check it out and add it to your playlist.