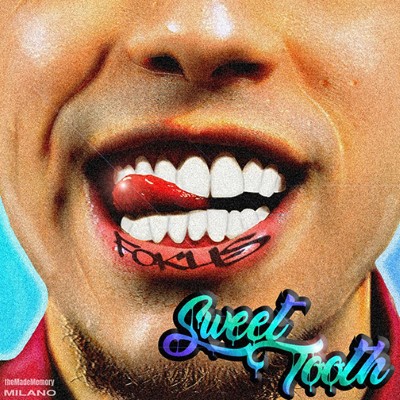 “As a Dancehall, Reggae and R&B artist looking to make music that will encourage my listeners to dance, I purposely made the concept of ‘Sweet Tooth’ very simple,” Fokus explains. “Basically, I portray my thoughts and observations of that woman who stands out in the crowd when going to the club, a party/jam, or what West Indians call a ‘fete’.

“In my lyrics, I explain how the woman who stands out in my eyes is one who is very subtle,” he continues. “One who is not trying too hard with her hair and makeup, but one who embraces her natural beauty, and does not care about what others think about her. She is there to enjoy herself, not to be judged or disrespected.

“This is the type of female I tend to crave for, in all romantic and intimate ways… Hence, my ‘Sweet Tooth’.”

With the beat produced by Yeong Chino, Fokus says he wanted to write a song that would get listener’s hyped for savouring the summer season.

“I also wanted to instill positivity throughout this pandemic crisis,” Fokus reveals. “It had to be a song that listeners can vibe and dance to within their close circle, and get excited about for the season.

“There has not been much upbeat music released throughout the past year and a half,” he continues. “Just listen to what’s on the radio. I wanted to write something in terms of my experiences of just starting off my weekend, after that last shift of the week from a day job, heading to a dance party function, and seeing the type of woman I fancy being attracted to.”

Check out “Sweet Tooth” below, and find out more about Fokus via our mini-interview.

Fokus is a Canadian recording artist specializing his music in Dancehall, Reggae and Rythm & Blues genres. As a singer and songwriter, the focus to his musical artistry is creating music that will vibrate within his listeners mentally, emotionally and physically. As a man raised from Caribbean roots, his childhood, family life and social life influences have consistently proven the most powerful vibration aside from the sound of music. That is dance. The objective of Fokus is to incorporate West Indian culture into mainstream dance music that will alleviate life pressures through dance within everyday mainstream music listeners. If listeners feel the urge to dance to his music, then Fokus has achieved and will continue achieving the goal.

Tell us about the recording process behind “Sweet Tooth”?

As I started writing, I based my lyrics off of my current situation; being tired of working my day job, looking forward to the weekend where I would go out dancing either to a Latin or a West Indian club in the city (before the pandemic of course). I decided to write about that one girl who would stand out in the party, and what makes her stand out, from my point of view. I’m sure everybody can relate to that simple fantasy of going to a party and finding the right mate who attracts you at first sight, and the more you get to know them and connect with them, the stronger that attraction grows. I felt that when writing a hit song, as much as it should relate to you, it should be written in a way that listeners can be engaged in the story you’re portraying in the lyrics. Delivery and the right tones are key for this, hence how I created the melody to go with the lyrics and the beat. I felt it had to be gritty, like how you’re “alter ego” would sound when it tempts you to go for something that you try to hold back on. Hence that “Sweet Tooth” craving. As an artist, I consider taking a simple topic and analyzing the mental behaviour, attitude, and sense of experiencing that topic. All of this was tied into my creative process to recording “Sweet Tooth.”

What’s it like, being a musician during the pandemic?

To be honest, the pandemic was my motivation to pick up my music and become completely serious about it. As I tell people nowadays, “I am on a ‘Make it, or die trying’ mode right now.” The pandemic made me realize how valuable life really is, and why waste that life pursuing a “Plan B”, when you had a “Plan A” all along? The pandemic got me deep in thought during the quarantine timeframe, it made me question what I was currently doing and where my life would go if I kept doing it, especially with this new norm of living. Everything that surrounded making music has always been where I found my happy place, whether it was dancing, singing, coming up with rhythms in my head, or even reading and learning about how the music business works. Unfortunately choosing to pursue a career in this industry is highly looked down on due to the chances of being successful in it. I’ve always been told from peers every time I picked up my hobby of making music several times over, “don’t quit your day job.”

Well when you are quarantined, you tend to only have yourself to listen to. Quarantine has taught me that you can only truly be happy if you pursue what you enjoy, no matter what the success rate of that career is, according to your peers. Your gut will tell you what your purpose in this life is, and I’m choosing to listen to it over all the chatter this time.

Having the industry become dominated by streaming rather than making money from fans buying hard copies of your music, being a musician during the pandemic I would say is very possible. Contrary to other businesses that depend on customer interaction physically or in-person, majority of the music business is digital. So to me, it’s not about whether I face a challenge being a musician through a pandemic, it’s about adapting to the circumstances and learning how to make it in the industry on an online standpoint.

What do you hope to accomplish in your career, in 2021?

I hope to firstly, come out with my first LP by end of this year. I also hope to gain as much exposure as I can locally in this major city of Toronto. I think focusing on local exposure is key to having doors open in other areas of the continent due to the amount of international connections that this city alone has. I aim to get my music on major Caribbean music radio stations in Toronto, such as G98.7 FM. I also want to look into online or live concerts where I can open up for other well-known artists in the city who are of urban or dance music genres. Aside from these goals, I am aiming to put out at least one more music video and promote it before the end of this year.

Is there anyone you would like to collaborate or open/close a concert with in future?

So locally, I would love to collab with a pioneer of Dancehall music from Toronto, Kardinal Official. Also if possible, open/ close for big names from the city, like Pressa, Killy, Roy Woods and if I’m blessed enough, Drake. An artist who has been successful at tapping into the Dancehall industry who has newly blown up with in the last decade, and as well one who my circle of friends from high school in Brampton have been acquainted with before he blew up, I would love to collab with Tory Lanez. Another local artist I’d like to collab with is Snow (Toronto Dancehall legend).