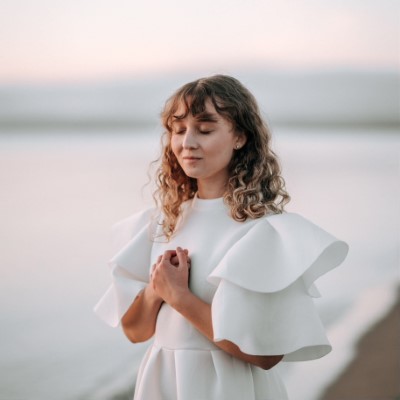 troubadour is a thrilling and soul-stirring addition to the contemporary Canadian folk canon. The record is a brave expression of queer womanhood, of running away and getting lost in the world, of falling in and out of love with shifting people and places, and of returning home at the end of a long journey.

The EP was written and produced in complete isolation during the 2nd and 3rd wave of the COVID-19 pandemic alongside Toronto-based producer and instrumentalist, Mike Tompa.

Check out the EP below, and find out more about Camie via our Five Questions With segment.

Hi everyone! My name is Camie and I’m a 24-year-old Toronto-based indie folk-pop artist. I have a bit of an unconventional artistic/musical trajectory, so bear with me – as a kid, I played classical harp for ten years (weird and cool, I know!), but I made the switch to jazz vocals and alternative/folk songwriting in my adolescent years. I now work as a multidisciplinary artist and researcher, and my prize-winning plays, performance works, and songs have gone on to do some pretty cool things, both locally and internationally. I’ve been gigging around parts of Southern Ontario (and, in a pre-pandemic world, the United Kingdom) with my folk music since about 2012, and I just released my breakthrough studio EP, entitled troubadour, on August 6th. You can find me (and my very cute kitten, Leopold) everywhere on the internet at @thecamiliad, or at camilleintson.com.

Sonically, I consider myself of the ‘alternative folk’ genre – I’m interested in traditional folk stylings imbued with contemporary synth and string textures. My music is ambient, orchestral, cinematic, and daydreamy. I was raised on a lot of 60s and 70s folk, which has largely influenced the music I make today, but my stuff draws from a wide sonic palette – I’m really interested in combining traditional folk with alternative pop stylings. Joni Mitchell is the artist of my life, and I love Leonard Cohen as well, but I’m also heavily influenced by artists like Fiona Apple, Phoebe Bridgers, Laura Marling, Julien Baker, and Amy Winehouse. Beyond that, things like poetry, language, and storytelling are central to my work. As a result, a lot of my songs feature lyric poetry and intimate confessionals. I think that lyricism is where I thrive in my musicianship. I’m a storyteller! I like to take my listeners on a sonic and poetic journey. I like creating ethereal worlds for people to swim around in.

As for my writing style, I’m a solo writer. All my songs are written by me, on acoustic guitar. I think that’s because solitude has always been important to me as a creative force. I find that I need space, time, and isolation to tread through my emotions and impressions of things, and to really figure out where I’m at before I get to writing. I’m very conceptual in my writing practice, so ideas can take awhile to mature in my brain before I feel 100% confident with whatever’s there. I’ve actually never co-written anything, but that’s something I really want to do in a post-pandemic landscape. More than anything else right now, I’d love to be in a studio, collaborating with other songwriters.

I’ve fluctuated creatively during the pandemic – I’ve gone through periods of really intense motivation and creativity, and equally intense periods of stagnancy and creative blockage. I think that rest and self-care are huge creative stimulants, and I’ve taken lots of time to eat well, sleep well, take long bubble baths, and practice self-compassion during this past year and a half. My EP troubadour was actually written and produced during the 2nd and 3rd waves of Covid in Ontario – my producer TOMPA (Mike Tompa) was the only human I saw in person for weeks during the early months of 2021. That sense of isolation bred a strong vulnerability and intimacy with the work; the quarantine allowed us to hyper-focus on the project, on what we wanted to say and do with it. I don’t think you can force creativity or productivity, but you can work on giving it (and yourself!) a safe mental environment so that when inspiration strikes, it feels comfortable coming out to play. Being kind to yourself, and being patient with yourself, is everything. It’s been a tough couple of years.

My favourite song from my EP troubadour isn’t actually any of the singles – it’s the fifth track, called “a river in winter / mnemosyne”, and I really love it both sonically and poetically. It’s a 2-in-1 song, and the first half is like a memoryscape on a frozen river. It’s got a very traditional folk melody line with shimmery, watery synths and a gorgeous cello line. The second half is an ode to the Greek goddess of memory, Mnemosyne, and it gets a lot darker with the bellowing synths and harmonies. In that second half of the song, I’m essentially begging the goddess of memory to keep my memory alive in the minds of people I love and have loved. If the first half of the song is a melancholic stroll down a winter river/forest landscape, the second half is getting lost on the banks as it starts to get dark and you start to panic as you wonder if you’ll ever make it out of the woods.

Community is everything to me. I want to take this time and space to plug some musicians (and people!) who inspire me immensely: The Lifers, Maddie Storvold, Tragedy Ann, Samson Wrote, POESY, John Muirhead, Emmet Michael, and of course Mike “TOMPA” Tompa. Each of those incredible Canadian musicians is well worth a listen! Check them out!