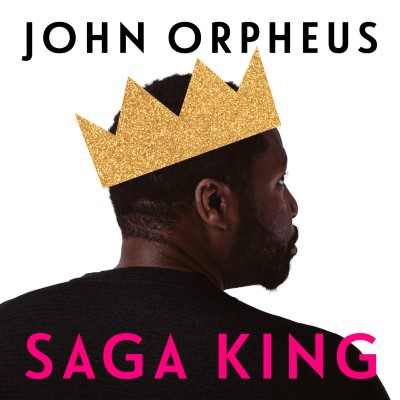 Saga King was made as a companion to John’s acclaimed memoir, Saga Boy: My Life of Blackness and Becoming, released earlier this year as a digital audiobook — with physical copies to be released in mid-September.

John describes Saga King as a “Love Letter” to himself and that love is evident in every track. Saga King is clearly a victory lap for an accomplished musician and writer. While writing Saga Boy, John became inspired to produce this album and did so over a six-week period in Autumn of 2020. This condensed period in no way lacks the refinement of a ‘rushed’ project but has the easy style of a polished artist who could knock out exceptional tracks in his sleep.

Saga King jumps right into your eardrums with its first notes to its final frets to demand you dance with it. Even when the tracks cover somber topics such as war, the passing of a family member, or missing family and the Caribbean during the pandemic, they keep an upbeat tempo with a focus on hope over despair. As John says, the album focuses on themes of belonging, identity and the celebration of sovereignty only self-awareness can bring — the celebration of a Boy turned King.

Standout tracks on Saga King were “IG”, “Damn”, & “Olurun”. “IG” kicks off the album as its first track with a bang as John stresses how he’s IG (IG here stands for “I Got To Live”) despite all of the pressures the world puts on his shoulders. Featuring a crowded chorus, driving bassline, kicking drums, and even cowbell, “IG” creates a cacophony that John’s flow deftly navigates with ease.

“Damn” is similarly chaotic, featuring loud kick drums, horns, and a healthy mix of 70s funk to more modern hip hop trends. Here, John reflects on his long storied career through the music industry as a black performer and the changes he’s seen in it throughout.

“Olurun” (another word for God) adopts the pastiche of traditional indigenous folk songs, but with a modern twist. Featuring a female vocal chorus and handclaps at its base, Olurun also adds distorted bass and electric samples. The result is a powerful song of praise for Olurun as John pays homage to his spiritual side and its part in his development and the wellspring of hope Olurun gives to him about the future.