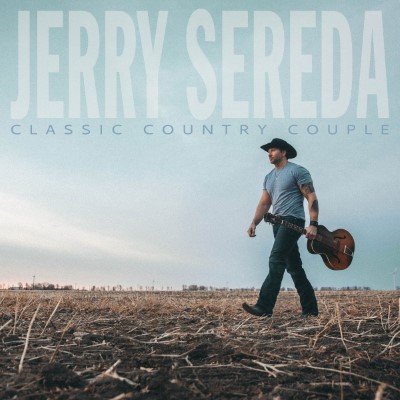 Multi-award-winning Canadian country singer Jerry Sereda just released his fourth studio album, Classic Country Couple, on National Indigenous Peoples Day, June 21. This album pays homage to his Métis heritage that includes much inspiration from his late Grandma Dottie and is reflective of Sereda’s recent personal and musical evolution. It was produced by an all-Indigenous team that includes himself, Troy Kokol, and Jamie Lillie.

Classic Country Couple has nine tracks and his first single, “Trailer’s Rockin’,” hit #1 on the Indigenous Music Countdown in 2020. “You Got It” reached the Top 5 on the IMC in 2020.

I, through Canadian Beats, was asked to chat with Jerry Sereda. For me, it’s like chatting with an old friend, as he was one of the first Manitoba country artists that I started following a decade ago. So, let’s get on with it.

Hi Jerry. It’s been a minute and you’ve accomplished so much over these last couple of years, but we’re here to chat about your new album, otherwise, this interview could go on for days. First of all, though, we at Canadian Beats want to congratulate you on taking home the hardware for Country Album of the Year at the inaugural Summer Solstice Indigenous Music Awards held this past June for your third studio album, Don’t Mind If I Do.

Music is very powerful, filling people with energy, enthusiasm, hope, and in turn, giving us all a feeling of togetherness and you’ve seemed to have done just this with your album Classic Country Couple, so let’s chat about it …

Can you tell us a little more about your album, how it came to be?

After working with a few different producers, and not really finding the right groove for my new music, I reached out to some friends in Alberta to see if they knew any producers that were available to work with me to create a new album. After talking to my buddy Troy Kokol, he asked if I’d give him a shot at producing my album. He had done producing, but mostly for demo songs before we started working together. We released a couple of singles and I felt like our sound, our, songs and our relationship made the process fun and inspiring. Since then, I have worked with Troy to finish off one album that I had started with other people. We then finished off Classic Country Couple as our first full project and we are now finishing off the first single of our next album.

I discovered that I am highly adaptable when it comes to writing and recording music. I think a lot of artists discovered that while still trying to create and perform during this pandemic. I also discovered that I really need a caring, mutual relationship with the people I am working with to create music. I have had people in the past where I felt they just wanted to record my music, get paid and move on to the next project, or person. That type of relationship made me dislike the whole process of writing and recording. With my new team, I feel we all listen, care and believe the person comes before the project. That makes me love every step of the journey. We are all there to work together, encourage each other and grow as a team.

Describe the vibe of the music or the sound that you were aiming for.

We set out to create music that we both enjoyed. This included some more traditional sounding songs, as well as some that pushed the boundaries of country-rock, country-pop and alt-country. It was kind of Big and Rich, Luke Combs and Sam Hunt styles all rolled into one neat little project that we’re proud of. It was a project that allowed us to try out a few styles, and see what was a good fit for us to focus on for our next album.

What obstacles or challenges did you face in the making of Classic Country Couple?

The biggest obstacles we faced creating this album would have to be the remote nature of how we wrote, recorded and connected with each other to make music during a global pandemic while trying to create music that my audience would relate to, and love.

Do you have any fun stories to tell us about in the making of Classic Country Couple?

The only story I have about the creation of the album was the filming of the music video for “Anywhere But Me.” It’s not so funny as it was cold! We didn’t end up getting to film the video until late October, and when we did it was -10C with a cold wind. I had to stand outside in a thin shirt shivering like a leaf in the wind in between camera takes. Then when they’d be rolling, I had to put on my best smile and try look comfortable on screen. After the video shoot, I hopped into the truck and blasted the max heat for 45 minutes before I felt normal and could feel all my limbs again. Usually I’m good with cold, but five hours of standing, stopping, singing and repeating in the sub-zero weather gets to you eventually. This was also the case where we shot “Trailer’s Rockin” in November after the snow had fallen in a trailer with no heat, and I had worn a muscle shirt! Equally as cold and shivery!! Thankfully we shot the single “Classic Country Couple” in the beautiful Canadian summer heat!

Can you tell us some of the background stories that brought some of your songs to life?

My earlier music focused a lot on drinking, partying and rebellious songs. When choosing the songs for this album I was focused more on the relationships in my life. From the friends I enjoy hanging out with like in “Trailer’s Rockin” to the craziness we all experience when we go to enjoy music at country festivals for “Blood, Sweat and Beers.” Then, there was an ode to the love lost in my life portrayed in “Anywhere But Me.” Finally, there is the love found like in “Classic Country Couple” and “You Got It.” It was all really an album that focused on my personal journey since my last album.

Is there any one song on Classic Country Couple that you feel your fans can relate to the most?

As much as I said this wasn’t a party album, I feel that most people can relate to “Trailer’s Rockin” because after the last 17 months of keeping us apart, it’s now the time that people want to get together and catch up. “Trailer’s Rockin” says it all but telling people, if you hear us making a commotion, please come over and join us! No invitation necessary. We’re just happy to see you and happy to get together.

Were you able to record any of this album in a studio, or did it have to be done remotely? What was this experience like for you?

Some of the music was recorded just before we went into lockdown. So, there was definitely some in-studio work. The rest was done remotely, which made the creative process a little more difficult, but I feel we adapted well to the challenges. The experience was trying at times, but it showed me a bit about my resilience and adaptability when it comes to finding a way to create the music I love.

Do you have a favourite song … one that means the most to you?

The one that personally means the most to me is “You Got It” because it is a simple song from one person to another letting them know that you love everything about them. Not our most technical song, but often times telling someone how much you care doesn’t need to be complicated and poetic, but just truth from the heart.

Now that Classic Country Couple is released, what does the future hold for you in regards to getting the world to hear and catch hold of and love what your music is all about?

We have been doing live shows finally and we are looking at booking more. So, people can always check out what we’re doing at jerrysereda.com and following along on social media. We are also off to a good start on our next music video project. As always, we are appreciative of all the Indigenous and country stations for their continued support in helping us promote our new music to fans and friends across Canada, the USA and worldwide.

Last, but certainly not least, I know how much of an impact your Grandma Dottie had in your life, so I would like to end this interview with asking you to tell us all about her and what she did to inspire you throughout your whole music career.

My grandmother was a Cree woman who grew up taking care of and helping the people around her. That’s where I learned the importance of hard work and loving family. She also grew up playing the guitar and singing. That’s where my love of music began. I took an interest in learning to play the guitar and she taught me my first guitar chords. From that point on she always encouraged me to sing, learn and write new songs. Every time she would come over the first thing she would do is to ask me if I had written any new music. Regardless of the answer, she would always ask me to play my new songs or some older songs I’d written. Even on days I didn’t feel musical I picked up that guitar and sang to her, or she’d pick up hers and play along with me. I know she’s with my grandfather now, and she’s still playing along with me and cheering for me every time I grab that six-string!

Watch “Anywhere But Me “video HERE.

We, at Canadianbeats.ca, thank you Jerry for taking the time for this interview and helping your fans get to know you a little more. For me, who would have thought a decade ago that we would be doing an interview like this, right! We wish you much success with your album Classic Country Couple and continued success with all the great stuff that is coming your way.