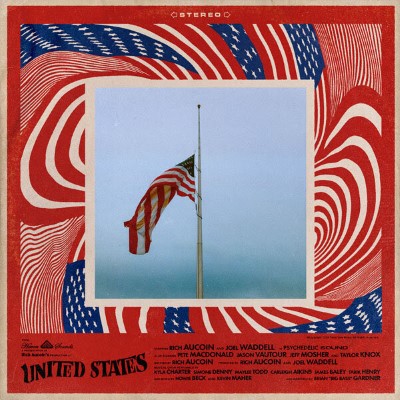 United States was the fourth album from Halifax-based artist Rich Aucoin released last September. Already an impressive album in its own right, Aucoin decided to release a deluxe version of the album. The deluxe version of United States includes two new remixes of album tracks from Double A and Steve Bays, and a bonus disc featuring instrumental versions of all the album tracks.

An ambitious artist,  Aucoin’s previous albums were written to sync with films such as How the Grinch Stole Christmas with hundreds of collaborators. The United States, however, was birthed in the spring of 2018, when Aucoin took off from Los Angeles by bicycle to arrive in New York City. The album was then fully brought to life in 2020 with a handful of studios across Canada with – for Aucoin – a more modest tens of collaborators.

United States is an album that you cannot sleep on – it won’t let you. The songs have an upbeat catchy 80’s pop aesthetic channeling the best of George Michael but are bleeding edge in content. Underneath the piano, synths, drum machines, and gospel chorus are fearless lyrics about the BLM movement, the border wall, school shootings, indigenous rights, the 1%, and the overwhelming divide between class and politics in America. Where some artists might take these topics and talk around them for fear of the effect it might have on sales, Aucoin calls them out directly with refreshing audacity. What is truly remarkable about this album, though, is at no point does it dip into the inherent sadness and common apathy with these topics – instead, it uses these topics as a springboard for its boundless energy to encourage optimism and action. This is the anthemic album you want to have with you when you take to the streets to keep your energy up for fighting the good fight. Then again, there’s still a timeless quality to the United States where even if you were not aware of the context of the aforementioned topics, you could still dance to its rebellious spirit.

Picking just one standout for this record was a real challenge: “How it Breaks”, “Red Rocks”, “Reset”, “Blue Highways”, and “Eulogy of Regret” all caught my eye as favorites, but the album as a whole is just dynamite. “How it Breaks” has this expansive energy (complete with a gospel choir) as Aucoin ambitiously breaks down how he knows the old American empire is going to crumble with the power of protest. “Red Rocks” is perhaps the ‘moodiest’ song on the album that borders on dark synth in a song about the rage of land exploitation. “Reset” uses kicking drum beat with militaristic grunts to stir action for gun control to combat the constant cycle of violence in America as “All the people die and reset.”

“Blue Highways” is almost too funky for its savage lines: starting with the line “Can’t buy me with an apology, pay your fee to this economy” it repeats in its chorus that we are “coming for the 1%” with such confidence you feel like it really could happen. “Eulogy of Regret” has a more somber mood at its start as Aucoin admits that he’s not immune to the overwhelming apathy that comes with being under the thumb of the sociopolitical systems designed to only benefit billionaires — but then the soaring chorus comes in and reminds us that a better life for all of us “can’t come true if you hide…So don’t you ever forget that all your time isn’t it over yet.” He begs us to “I thought death was a reckoning, not an echoing,” that our actions have the power to affect real change and not regret that we never stood up for our beliefs.