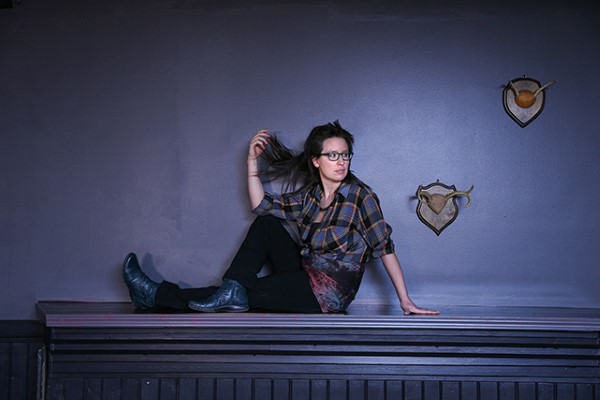 Yellowknife-based composer and singer-songwriter Carmen Braden has unveiled her new single, “Kick Kick”, along with a lyric video to accompany the release.

As the premiere glimpse of the multi-talented artist’s forthcoming third album Seed Songs, “Kick Kick” reveals the first of many moments captured and woven through song across the new full-length release.

“Each song has a core — a ‘seed idea’ — I tried to capture,” Braden shares. “They’re each a kind of vignette: a moment in time; a snapshot of joy or struggle, fragments; phrases; edges…

“Through this past fall and winter of the pandemic, the minutiae and small details of everyday life were my focus. I wrote dozens of these short ‘seed song’ ideas — all connected to moments of beauty I encountered, or struggles of the day-to-day. I strived to share things that may seem ordinary or simple at first, but are actually profound, fulfilling, and nuanced.

“Most of the songs are very short,” she continues — noting the shortest track clocks in at just 38 seconds. “I feel there is beauty in miniatures, in brevity. If I can say something meaningful and musical in one minute, then that’s all the time it needs to take!

“I chose 18 of the strongest ‘seeds’ to bring together in this album, and it was a journey in releasing expectations, allowing each song to have the sound or length it needed.”

Given how the album’s inspiration was gleaned somewhere between the ebb and flow of navigating Covid, the tangible construction of the album also presented a creative curveball, given social restrictions.

“I worked through the writing and recording of Seed Songs all by distance from my home in Yellowknife with my friend and producer Mark Adam in Nova Scotia,” Braden recalls of the process. “Working that way meant I brought the music to life with Mark in ways I hadn’t done before.

“Mark encouraged me to embrace the rough while not sacrificing the concise. I also used instruments and technologies that were new for me — guitars, synthesizers… This brought a process of freedom and exploration to the recording process.”

Check out the lyric video for “Kick Kick” below, and find out more about Carmen via our mini-interview.

I’m a songwriter and composer, living in my hometown of Yellowknife in the Northwest Territories. I caught a big jackfish the other day – first fish I’ve caught in ages, and felt proud as a kid.  And in that moment all the other accomplishments in my life felt unimportant! But when the euphoria faded, I’m still just me. I love writing songs. Usually about what’s in my surroundings, my human surroundings. I compose music, you could call it contemporary classical, for ensembles and choirs, soloists and chamber groups. For a long time that music really dug into music inspired by the environment in the Canadian sub-Arctic, where I live. Lots of rocks, ice (LOTS of ice music), lakes, ravens… That’s starting to shift – probably a sign of getting older and having kids – they tend to shake things up! There’s more humanity in my music now, I think, more spontaneity and freedom and wonderment. I love making music that plays around the edge of surprise or grit, but I’m a sucker for beautiful sounds and melodies and lyrics that grab you and spin you around for a moment. I’m also reaaallly loving miniature ideas lately. Trying to be concise and still complete is a hard thing – so I’ll stop rambling on for now!

Tell us about the recording process behind ” Kick Kick”?

My producer and I worked over the digital waves – he was in Nova Scotia (Mark Adam at the studio Music in the Woods) and I was in Yellowknife. I wrote dozens of short songs ideas – I called them “seeds”. Just wrote and wrote, putting each one aside after it was sketched out very roughly. I made demos of the ones we thought were strongest, for whatever reason, and then it became a great exchange of sounds and tracks. Mark mixed them and added his own sound to some of them – as a producer Mark has done more for me and this new album than just mix and engineer. He was a real support, a critique in the kindest and honest of ways. Some songs I was unsure how they would be able to come into the outside world, and others were all dressed up and fancy when they just needed to be simple. It’s been an intriguing journey of making this album. Lots of new experiences for me, including playing some guitar and violin which is NOT a strong skill of mine! But the sounds I got out of the instruments (I played almost everything on the album) were exactly what the song needed in the end, in those moments. I’m sure if I tried to record the same song again now it would come out completely differently! But I’m so proud of what I did for this album.

Number One Highlight – when my family grew to include our second child! Having a baby during a pandemic brought a lot of challenges, but so much joy. Both the struggles and the joy made it into this new album! A close second was writing the music for this new album – the process kept me aware of moments with real meaning in each day. Hard moments, soft moments, moments of unusual WOW! and moments of monotony that had a different kind of awe to them. Each song on the Seed Song album has its source in a single moment – and so I could easy reel off 18 moments (cuz there’s 18 songs) that really stick with me.

Write more music!  Freeze more instruments into the ice (I did an upright piano a couple years ago)! Write a new piece for string orchestra+percussion (for the Orchestre Classique de Montreal) – and improve my French so I can go to the premiere and talk shop with the players! Do research into music that doesn’t fall into genre-content categories – and right now that means I’m listening to some pretty amazing stuff. And one small personal goal is to do some playing on an instrument that’s not my main strength – right now I’m hoping to play some jazz with friends, just for fun, and I’ll play drums. Probably pretty badly, but I’ll be a happy camper doing it.

I was recently introduced to the music of Howe Gelb and I would love to get in his sphere. He’s got a way of writing these pearls of lyrics and placing them inside a real beautiful jumble of ideas and sounds.

And Veda Hille is an artist I’ve admired for a long time – especially as someone making music that doesn’t really fit genre boxes – and having a blast doing it on pianos.