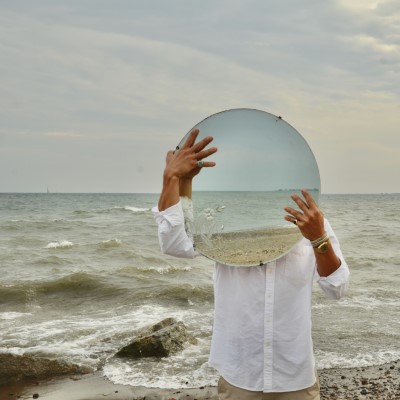 Toronto, ON-based singer-songwriter, kintaro has unveiled his single, “Death by Name”, which is the third solo release from the Birds of Bellwoods bassist, following the previous single, “Rewind”.

Inspired by the loss of his father, iconic Japanese-Canadian actor and musician Denis Akiyama, “Death by Name” is written from the perspective of death themself. They have a message of love for those listening, hoping to encourage people to live their lives before they inevitably meet the end.

This haunting but upbeat track—which offers deep thinking underscored by deep grooves—was conceived in the wake of kintaro’s dad’s passing. At first, he found himself confused and angry, but the hole that was left ended up letting in more light than darkness. Death, and the ephemeral nature of life and love have been a guiding force in the creation of this project, and these topics have become the narrative backbone of his EP, which will be released in the fall.

Check out the single below, and find out more about kintaro via our Five Questions With segment.

I’m kintaro. I’m a Toronto-based singer-songwriter and have been playing around Canada for a while now. You may have seen/heard me with my main project folk-rock band Birds of Bellwoods. After losing my dad in 2018 and feeling the ephemeral nature of life more than ever, I was inspired to give my solo project wings. The timing of the pandemic worked somewhat in my favour. Not being able to see/work with the band, and having lots of time to reflect, lead me to finishing up my first solo EP.

I began studying music at a young age. I started with piano, and then upright bass and guitar at Claude Watson School for the Arts. I went on to receive my BMus from McGill in Jazz Bass Performance. Alongside studying music in institutions, my house was always full of music. My dad was a professional musician (Pukka Orchestra) in the 70s/80s playing a lot of the staple Toronto venues that I have had the honour to play. Being immersed in music all the time definitely had a conscious and subconscious effect on my sound.

With Birds of Bellwoods I mainly play bass in a folk-rock style, so in my solo I project I allowed myself to play all the other instruments I love, and delve into other sonic landscapes. There is strong jazz influence, but probably more soul/r&b vibes. I hope that my solo project keeps growing, and is a constant reflection of my cosmic self. This project was fully written, performed, recorded and produced by myself, and my first endeavour into a lot of disciplines. A good friend Jack Emblem mixed it, and João Carvalho mastered it.

The pandemic has been a tumultuous time for me. I was super lucky to not lose anyone dear to me, and I got to spend a lot of time with my partner at home. There were definitely some rough patches in the middle there, but all in all, I have tried to embrace the flux of life. I used this opportunity to try and distill what it was I really wanted to do. What actually meant something to me. It took me a while to get there, and I’m still searching, but our rivers slowly flow back into the ocean, and we find where we are meant to be. There are so many hilarious memes about people “recording lofi-bedroom-concept-EPs” over this pandemic, and not releasing them. So in a small way, I won just by releasing mine. The first record always has to come before the second. I also learned how to poach the perfect egg. DM me for details @kintoaki

My upcoming EP was all written in the wake of losing my dad. Fortunately, the hole that was left in me let in more light than dark. I tried to channel that energy into all of my songs, but Death by Name is probably the greatest reflection of this. It is a song written from the perspective of death himself. It’s a love song encouraging us to live our lives before he kisses us goodnight. There is a light at the end of tunnel, so let it illuminate your life.

I am lucky enough to have played with some of my favourite Canadian musicians, and even luckier to call a lot of them friends. My boy River Tiber is always putting out top-notch material and has been a huge influence on this project. Jesse Gold is another close friend who keeps on relentlessly delivering bangers. I’ll be playing bass with him for a few shows in the fall which should be a good ol’ time! I’ve been vibin’ on Savannah Re’s record “Opia” lately, her voice is magic and the record has a real cohesiveness to it. We actually went to middle school together back in the day, though I haven’t seen her in ages. Canada is a real ocean of talent, and I know there is so much more to discover.