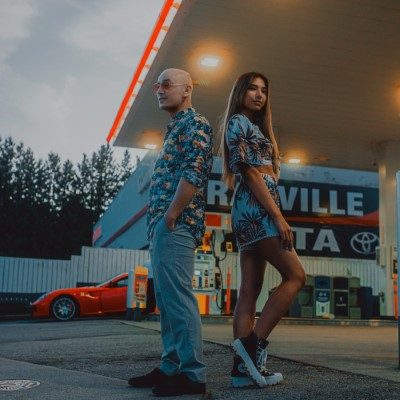 The track follows Clute’s previous release, “Body“, in which, he found himself questioning the feelings of unknowns and what it’s, which had been brought by a previous relationship. After going through the motions, Clute takes us on a midnight ride through the city.

The forthcoming track, “Midnight Drive” came to fruition shortly after Clute and close friend/producer Sal Verma of Sound of Kalima heard The Weeknd’s tracks “Heartless” and “Blinding Lights.” In homage to the two inspired tracks, they threw in some synth-wave and 80’s/Stranger Things vibes. The creative process allowed Clute to take a new sound and tailor it to his unique voice and personality. It also opened the door to bringing in another vocalist on the track, Saya Helton, who he met at UBC University.

Clute chimes in on the track,

“Midnight Drive is a desperate drunken love song about someone trying so hard to salvage a relationship that is falling apart. They are so anguished by not being with this person that they would drive miles in an inebriated state just to see them.” He explains that, “The two verses and first chorus take us on a downward spiral going head first until we reach the bridge lyric “I just wanna feel good” which is the inevitable rock bottom for our main character. This person has come to terms with how much they need the validation that their lover provides. The character in this song is experiencing a momentary lapse in judgement with no regard for the consequences which is something we’ve all experienced at one point or another.“

Check out “Midnight Drive” below, and find out more about Chris via our Five Questions With segment.

Hi!!! my name is Chris Clute and my favourite thing in the world is playing music and performing with my band. I’ve been writing, recording, and producing songs with my team for about 4 years and we’ve been getting better with each release! (I think at least). Things I love include Starwars, Hockey, my friends, and my family

My sound has evolved a lot since the start. Sal and I are always pushing to find new things that inspire us. As for writing style, I’m not really sure. I kind of just try to throw as much at the wall as humanly possible and then fill in the gaps or trim the fat wherever needed.

It was definitely tough at the start. I ended up buying a mic and interface so that we could keep working from home. The zoom sessions with Sal and Pete weren’t ideal but helped keep us productive during what felt like a lifetime of isolation. Our pandemic writing process involved a lot of recording on my own and sending files back and forth. Again not the most ideal but we were able to keep things moving!

It would have to be my latest release “B O D Y”. It’s got groove, swag, and hits hard in the feels.

Arkells were a big inspiration early in my career and made me want to start performing again. Shortly after seeing them for the first time, I started a band. It didn’t last but we had a great time and I’ve gained plenty of experience from working in that band.