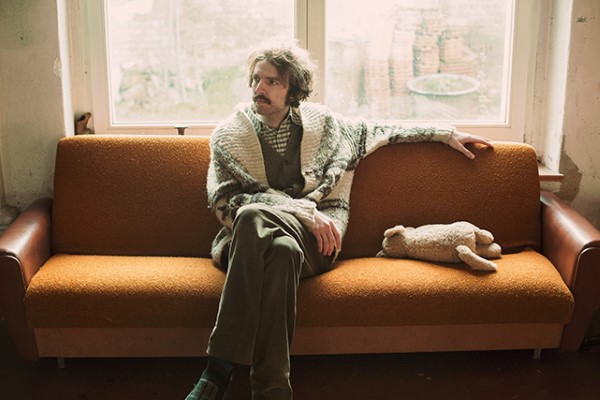 The song is the latest to land from Carpet of Horses’ new album, Ballroom — released July 2021. An entire dance floor of tantalizing soundscapes daring listeners to disappear inside their party for a memory or two, each song on the full-length challenges the next to be the ‘belle of the ball.’

Placing artistic freedom on an album chocked full of unique instrumentation, harmonies, unsuspecting hooks, and melodies, CoH compressed its expansive sound into nine-tracks of cosmic space that leaves listeners reaching to dial-up the good vibes. It’s a new “old” album, and its recording setting is just as much a part of it as its sound…

To set the scene: Tobin James Stewart had left his hometown of Toronto for a stint across the world. Landing in Berlin in 2008, the environmental shake-up proved fruitful for the singer/songwriter and multi-instrumentalist; CoH delivered on a laundry list of creative projects, namely the first full-length record, Red Paper Flames (2016), released alongside Collages, Vol. 1 (a compilation disc comprising the CoH first three EPs.) These releases lead to the inception of Carpet of Horses’ own label, Montsou Records.

That trip would also prove to lay the groundwork for Ballroom, as it stands (and sounds) today…

“I had been living in Berlin for the better part of a decade and, on a whim, decided to rent a house in a tiny village in the former GDR countryside,” CoH shares, referencing Bergsdorf. “The house had previously been the village restaurant, and behind it stood an unused 200m2 ballroom.

“I brought all of my gear from Berlin, and converted the ballroom into a huge recording studio,” he continues. “Someone in a nearby village was giving away their piano, and a local family of farmers I’d befriended helped me move it in.

“The local villagers shared lots of stories about the festivities and weddings that had taken place in the ballroom over the years. There was a lot of intense history embedded in those walls.”

The LP’s nine original tracks are each a dazzling course of audio and picturesque moments prepared to infiltrate your whimsical desires. Beyond “Honeybee,” “Starland Waltz” channels a romantic ¾ time, while “Rosie’s Garden” pops out of the speakers, like succulents soaking in the sun.

What Carpet of Horses manages to create is a visual from audio — heavy percussion precariously plucked between distorted riffs, juxtaposed in delicate melodies, and cheery harmony.

Check out the video for “Honeybee” below, and find out more about Carpet Of Horses via our mini-interview.

My name is Tobin J Stewart. I write and produce songs and release records under the name Carpet of Horses. The project was born in Toronto around 2005, followed me overseas for about a decade, and returned home with me a few years ago to Guelph.

Tell us about the recording process behind ” Honeybee”?

“Honeybee”, alongside the rest of the songs on my latest LP, was recorded in an old ballroom in Germany back in 2015. I’d been living in Berlin, and on a whim, I rented a house in a tiny village called Bergsdorf, about an hour outside of the city in the former GDR countryside. Behind the house lay this huge, unused ballroom. I converted it into a recording studio. The space had a very specific sound, and the character of the record comes from the natural reverb I toyed around with while recording. I put a lot of microphones in a lot of places, both near and far to what I was doing, to create a natural depth to the mix that plug-ins could never have come close to simulating. For that reason, the songs and the space can’t really be separated.

I also came up with the ideas for the songs on the fly, avoiding the laborious process of songwriting pretty much altogether. I’d sit at an instrument – take a piano, for example – and mess around on it until I came up with a pattern I liked. I’d immediately record it, and that would become the foundation for the intro to the song. Then I’d move to another instrument – a chord organ, let’s say – and come up with another pattern, and that would lay the foundation for the verse. I’d keep moving from instrument to instrument, allowing the different sounds to guide where the song wanted to go, until it felt like an entire song structure had been built. All of the songs were assembled in this way, very quickly, with no second-guessing, and without a lot of concern for what would result from the process. It was a new approach for me, and I think it worked out pretty well. The whole record was an exercise in avoiding overthinking, which is something I tend to do a lot of.

Spending so much extra time with my kids during lockdowns, making more music than I ever have, and meeting my girlfriend. 2020 was a difficult year that luckily had enough silver linings to prevent my mind from completely eating itself.

I’ve hired a publicist for the first time, so hopefully, these new songs, and even my old ones, will reach some new ears. I’ve been criminally lazy about the promotional aspect of making music over the years so I hope I can make up for some of the lost time.

I’m putting the finishing touches on another full-length record, I’ve already laid the groundwork for another one after that, and I’m also working on a collaborative record with one of my favourite ever song makers. So there’s a lot to accomplish and a lot to be excited about.

If I could bring them back the list would have to include Mark Linkous, David Berman & Jason Molina. I continue to have a deep love for the songs of Tim Ruitili, Doug Martsch & Jason Lytle, so I’d collaborate with any of those guys in a heartbeat. I’d probably be too nervous to be in the same room as PJ Harvey, but I’ll go ahead and add her to the list. Beyond those songwriters I’ve admired for so many years, I have to admit I’m fairly out of touch with what’s going on in the music world today. But I’m lucky to have quite a few friends who make great music, so hopefully we’ll all be playing shows together soon.