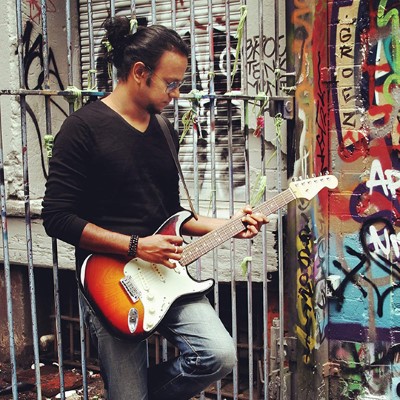 Ottawa, ON-based rocker, Ash Ravens has released the single, “Beautiful Lies”, which takes on “lies and deception” that the Bangladeshi-born artist experienced in a past relationship.

Complemented by emotional instrumentals, Ravens’ richly layered lyricism is drenched in satire as he sardonically projects so-called love for his partner’s lies — all while feeling used and trapped in a cycle of toxicity, with no idea how to escape.

In his own words, the veteran musician summarizes the song as being about “knowing when the other person is lying and cheating,” he shares. “You let them keep doing it, and let them dig their own grave.”

The line “so lie with me / and lie to me” helps underscore his feelings about this former flame and, while the lyrics might be hard to stomach for those familiar with the subject matter, “Beautiful Lies” is a real treat for avid six-string enthusiasts. There’s a lot to absorb in this three-minute, 30-second tune, from intermittent sweep-filled guitar licks, to undeniably melodic fills shredded by Ravens… You’ll be itching to go back and hear it again.

And to top it all off, the listener is treated with a mind-blowingly clean and awesome electric guitar solo following a hard-hitting vocal breakdown. (During the filming of the video for “Beautiful Lies,” Ravens attempted the “play-guitar-behind-your-head” act — made famous by Jimi Hendrix — during said solo and, because the director liked it so much, it ended up making the final cut.)

Check out the video for “Beautiful Lies” below, and find out more about Ash Ravens via our mini-interview.

Absolutely! Hey, I’m Ash Ravens, an Ottawa based, Bangladeshi-born musician and producer. My pursuit of everything music took me out of my hometown all the way to Los Angeles where I went to music school and then to Melbourne, Australia where I lived, played, and produced music with various artists over the last 7 years. I’ve recently moved permanently to Canada and have made Ottawa my home. Very glad to be here in the Great White North and looking forward to making music in Canada!

Tell us about the recording process behind “Beautiful Lies”?

“Beautiful Lies” started in a dark place (as songs often do!). The song was written when I found myself in the middle of a toxic relationship full of lies and deception. Although I knew I was being lied to, being manipulated, and cheated on, I couldn’t let go of it – I was under some kind of spell, maybe? Some black magic was probably going on haha! The person in question was a master in spewing an intricate web of lies which, although hard to digest, was perhaps, in a twisted way, beautiful to look at from very, very far away. That led to me to the title ‘Beautiful Lies’ and the rest of the song came naturally. I often look at life through my own lenses of satire and sarcasm, so the lyrics reflect exactly that. It was my own way of dealing with the situation I was in. It was an awful experience, but hey thankfully I got a song out of it! After the writing was complete, the song sat in my diary for a while. But during a recent visit back to my hometown, I got together with some of my friends to jam and we decided to record this song together. I usually write and record my song parts myself but it was a welcome treat to have my friends Turjo and Rahi play some amazing drums and bass on it!

There’s no doubt that 2020 was a horrible year for all of us, but being an optimist, I tried to make the best of the downtime I got. I wrote a book full of new songs and recorded them, released a lot of cover songs on YouTube, orchestrated a few film clips, re-connected with my mental health through meditation, and took a year’s worth of afternoon naps!

I will be releasing a lot of singles in 2021 and 2022 – hopefully a new single every 2 months. As the live music scene comes back again, I’ll be playing live as much as possible too, we all missed it very much. And my biggest hope is to hear one of my songs in a Canadian film or TV show, I’ll be working on that!

Yes! I dream big, so I would love to collaborate or open a concert for any of these artists who happen to be my heroes – Lenny Kravitz, Richie Kotzen, or Big Wreck. I’m putting that out into the Universe now, through Canadian Beats!