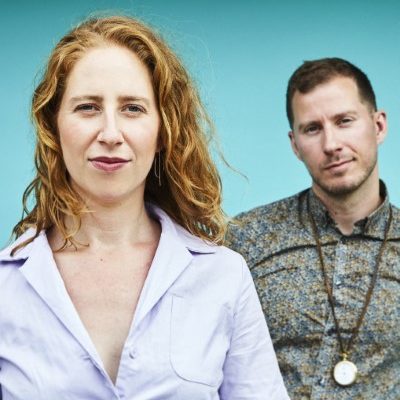 Toronto, ON-based indie art-pop band, Hush has unveiled their debut single, “Land Waves”, a moody indie-pop track about seeing what you want in your life, but because it’s so far away and seemingly unattainable you’re scared by it while wanting it all the same.

The duo was formed by singer/songwriter Jessica Deutsch and multi-instrumentalist producer Tyler Emond, creating songs that touch your heart with beautifully expressive lyrics while entrancing your ears with genre-bending sounds.

Check out “Land Waves” below, and find out more about Hush via our Five Questions With segment.

Hey everyone, this is Jess and Tyler from Hush. We live in Toronto, home of the Tesla and expensive tie conventions. Weʼve been making music and backing up other artists for a bunch of years now, playing music thatʼs all over the map with people like Alessia Cara, Leif Vollebekk, Tyler Shaw, Banners, Sarah Slean, Canadian Arabic Orchestra, etc… In early 2020 we decided to fully lean into our own music and start Hush together.

Musically we like to straddle the line between art pop and experimental sound production. Sounds like a mouthful, but it covers where we’re coming from influence-wise. Jess sings and plays keys and guitar in the band, but grew up performing classical violin concertos. Tyler played bass and drums in R ʼn B, blues, and rock bands before getting into sound production. Weʼve both been playing music from all over the world the last few years (Flamenco, Brazilian, Arabic, Afro Cuban), so when we write songs for Hush we have a pretty wide palette of ideas to draw from.

Usually, when we write we are just improvising ideas together on whatever instruments we have nearby, and a song always seems to crawl out of our jams. Even the process of writing lyrics comes spontaneously on the spot in reaction to the chords weʼre playing, and often this shapes the narrative of the song. We’re really lucky to have a home studio where we can experiment with lotʼs
of different sounds while we’re writing. It’s definitely super fun to get lost in a sea of possibilities while being creative. We have so many favourite bands and songs out there that elicit these emotional responses from us. Weʼre really just trying to take all these elements that are at our disposal and figure out how we can make music that delivers the same kind of energy to anyone who listens to us.

The pandemic, pretty bad for most things, was actually a good thing for creativity. Normally we would be spending a lot of time touring with other artists and not leaving a ton of space for ourselves. Once all the gigs dried up we took a step back and realized that this was the perfect opportunity to go deep into our own thing. By writing and recording all the time we learned to get right to the essence of the song and what we wanted to say. With music, like so many other things, you can have these blind spots that are holding you back without you realizing it, so it was great to take the time to look inward, with few distractions, and really grow our own voice. The pandemic also gave us a lot of time to experiment with our
instruments and do weird, sometimes hilarious, things with them. Because we do all our own production and mixing we could sample water drops and make beats out of them, or record a wall of violins with a bunch of wild effects processing. We took full advantage of being kids in a candy store.

Our debut single, Land Waves, came out only a few weeks ago and it certainly paints a great picture of what we’re about. Itʼs vibey, fun, and full of surprising moments, which are things we love. We worked with the amazing director Adrienne McLaren on the music video, and it really captures all the different colours and moods of the song. Check it out, and for Toronto people, see if you can figure out where it was filmed!

We are big fans of Patrick Watson, La Force, and Leif Vollebekk. That particular Montreal scene of dreamy songwriters has a special place in our hearts. We also really dig everything from Grand Analog, Zinnia, Bernice, The Weather Station, and Charlotte Day Wilson. For anyone who hasnʼt gone to Winnipeg to see live music, go! Every band there is great!