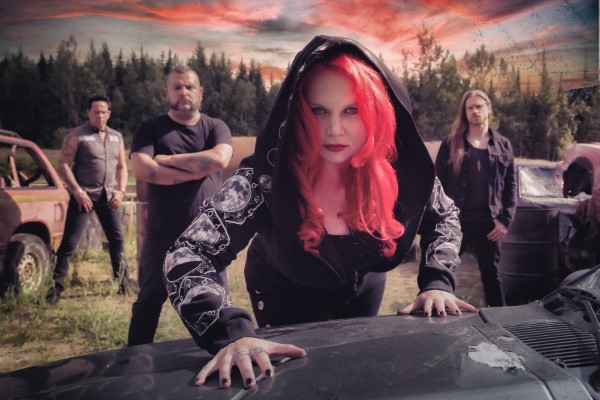 Produced by Jay Van Poederooyen (Hinder, Devin Townsend, Nickelback) in their hometown of Vancouver, “See U Nxt Tuezday” heralds the group as a tour-de-force as they deliver an energetic, uncompromising performance. Driven by Larissa’s powerful vocals, the track pummels the listener as it winds its way through a plethora of starts and stops, which helps to highlight the group’s technical prowess.

The video for the song captures the band in a post-apocalyptic nightmare, standing tall as the world burns around them. Directed by Dave Benedict, with whom they worked on their “Heart Shaped Ashes” video, Larissa said they felt the track warranted an atypical treatment, something Benedict was happy to indulge them with.

“Dave saw this as a performance video, but with a twist. We wanted the edgy energy of the song to be at the forefront of the video because ultimately, we wanted to create something that might pique someone’s curiosity and give them a reason to stop scrolling.”

Check out the video for “See U Nxt Tuezday” below, and find out more about Celestial Ruin via our Five Questions With segment.

Please introduce yourself to our readers?

We are Celestial Ruin. We’re a female-fronted band from beautiful Vancouver BC. We formed in 2011 and have been making music and touring for the last 10 years.

You can call us Hard rock or Metal. However, we never like to pigeonhole ourselves. We have written in a variety of different rock styles since we started. Everything from Symphonic to power metal to mainstream rock. It doesn’t matter as long as we are “feelin’ it”.

Before the pandemic, the entire band wrote together in the same room. Someone would pitch a riff or an idea and if Larissa felt a connection to it, she would write the lyrics and create a melody. During the pandemic, our writing evolved a bit as we wrote via video calls. Lots of back and forth.  Now that we can be together again, we have returned to our roots and all write together as a team at our jam space.

We dedicated our “time off” to writing and made good use of that time to evolve our sound. It was actually great timing since we got a new guitarist and he brought a whole new energy to the project.

The best part though is we were able to get into “The Armoury Studios” with Jay Van Poederooyen (Devin Townsend, Nickelback, Hinder) to record our latest single “See U Nxt Tuezday”. On top of the excitement of our new track, we also did a music video with Dave Benedict (Default, Bonds of Mara). So even with all the chaos in the world right now we managed to somehow stay busy.

Definitely “See U Nxt Tuezday”. This song is flat-out in-your-face rock! Balls to the wall! It is extremely relatable. An anthem for anyone who has ever been talked down to and treated like they were less. It’s a giant middle finger to all those who would try to tear you down to make themselves feel better.

The song just has so much energy and pumps you up. It’s just so much fun to play and we can’t wait to do it live!

We dig Bonds of Mara. Such a great group of guys! So much energy live. Also, gotta show some love for the guys and gal of Unleash the Archers.

Larissa is a fan of Three Days Grace and Nickelback. Adam our drummer loves The Birthday Massacre, Great Big Sea, and Moist. Our bass player Mike likes Rush, Three Days Grace, Default, The Headstones, Doug and the Slugs, and The Tragically Hip. Last but not least, Our axe man Marcus lists Bill Talent, Alexis on Fire, Rush, and Big Sugar as some of his favorites.