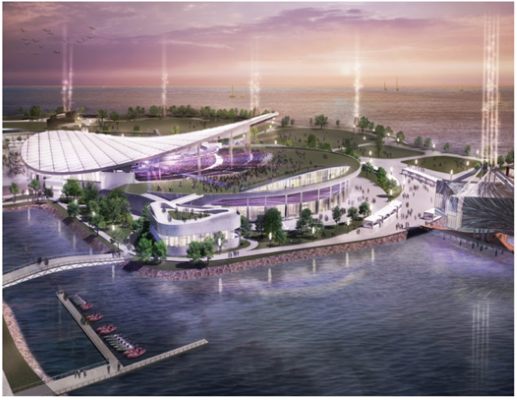 The new state-of-the-art amphitheater will continue to attract world-class artists and provide premiere live entertainment, hosting live music and other events. This demonstrates Live Nation’s support of the Provincial government’s vision to revitalize and redevelop Ontario Place as a premium destination that will attract global visitors through remarkable new attractions.

With sustainability at the heart of the design, the redesigned amphitheater at Ontario Place will be designed and built using strategies aimed at improving performance across all the metrics that matter most: energy savings, water efficiency, greenhouse gas emissions reduction, improved indoor environmental quality, and stewardship of resources and sensitivity to their impacts. Completed by 2030, the new facility is expected to receive up to 1 million visitors and support more than 900 jobs during events.

“The redevelopment of the amphitheater into a year-round venue will offer fans more opportunities to celebrate the live music experience with their favorite artists,” said Riley O’Connor, Chairman, Live Nation Canada. “We’ve been making memories on Toronto’s waterfront at Budweiser Stage for more than 25 years and we look forward to the next 25 years of music history.”

“Live Nation has made the Ontario Place amphitheater a landmark entertainment destination for more than 25 years,” said Lisa MacLeod, Minister of Heritage, Sport, Tourism, and Culture Industries. “Their plan to redevelop the amphitheater into a modern, sustainable, year-round indoor-outdoor live music and performance venue will attract more high-profile musical acts and incredible, world-class events than ever before. It will be a great addition to the redeveloped Ontario Place, and its role in supporting Ontario’s social and economic recovery.”

Live Nation Canada, Inc. is the country’s leading live entertainment producer and promoter, offering the best of Canadian and international talent at stadiums, arenas, theatres, and club venues across the country.  Live Nation continues to be a true leader in the live industry in Canada to help elevate homegrown artists to the world stage.