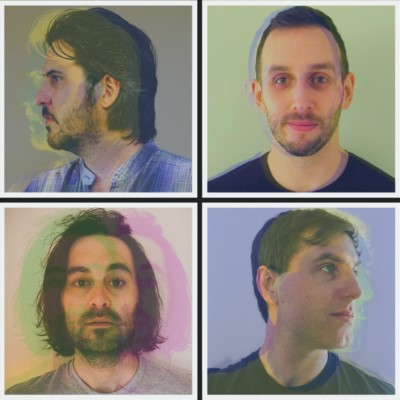 Interprovincial (PEI/ ON) pop-rock band, Golden Cinema is composed of members who cut their chops during the East Coast indie boom in the early 2000s with bands such as Two Hours Traffic, Arkells, and North Lakes.

They released their album, REELS (2016-2021) on July 23, 2021, marking the first physical release for the band, combining the band’s previous digital EPs with two new songs, “Little Sunscreen” (currently charting on CBC Music’s Top 20) and the recently released “Dead Ringer,” which was accompanied by a music video bringing together notable names such as Tim Heidecker (Tim & Eric), Vic Berger (Office Hours), Mike O’Neill (TUNS, Inbreds), KINLEY, Martha MacIsaac (Superbad, Emily of New Moon), members of Kiwi Jr., Villages, and Sorrey, and many more as they film themselves listening to the single for the first time.

Check out the album below, and find out more about Golden Cinema via our Five Questions With segment.

Hey, my name is Andy MacDonald and I sing and play bass in a band called Golden Cinema. We’re about to release our first record on Friday, July 23rd called REELS (2016-2021).

I suppose you could call us a power-pop band in that we like to write short, catchy rock songs and play around with vocal harmonies. When it comes to writing style, I have gotten into the habit over the past few years of working on songs while watching movies or sometimes right after a movie. I’ve found it to be a very enjoyable process. In fact, it was part of the inspiration for the band name.

One thing we did to keep creative over the past year was to reach out to friends of ours, asking if they wouldn’t mind filming themselves listening to the first song on our new record, called Dead Ringer. It ended up being a super fun collaborative project and we ended up with videos from some unexpected people, like Tim freakin’ Heidecker! Check it out:

That’s a cruel question but let’s go with… Little Sunscreen!

Currently really digging the new TUNS record, “Duly Noted” and Ian Daniel Kehoe’s “Rock and Roll Illusion”. Too many favourites to name but if I had to pick one, you really can’t go wrong with Dog Day. They have been quietly making great records for as long as I can remember. Do yourself a favour and check them out.