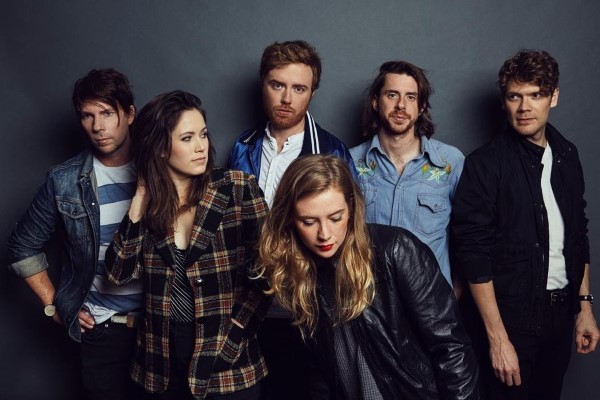 Following over a year and a half of being away from the road due to the Covid-19 pandemic, acclaimed indie-rock band Fast Romantics are thrilled to finally be able to announce Canadian dates in support of their critically acclaimed full-length album, Pick It Up for Ontario and Quebec.

The first and only ‘Pick It Up’ tour to take place, the 11-date live in-person tour kicks off October 16 and will conclude with two exhilarating back-to-back hometown shows at the legendary Horseshoe Tavern in Toronto on November 5 and 6. Tickets for the dates are available now and can be purchased online at fastromantics.com. Special guests for the dates will be announced in the coming weeks. A complete list of dates can also be found below.

“A year ago, we put out our “pandemic record” PICK IT UP, and we never got to tour it. Today we get to right that wrong, by announcing 11 dates in Ontario and Quebec,” shares lead vocalist Matthew Angus. “We’re gonna finally celebrate the record with real humans, together in a room at last, together at last. There’s no way to describe how good the whole thing feels. Feels like a rebirth. A coming out of a cave. We’re so hungry for it that. I can’t promise I won’t come a little unhinged up there, but the kind of unhinged that I think we’ve all been saving up these past couple of years. Not sure what exactly to expect when we get up there, but I know they can’t end up being anything but the most special kind of shows.”

In anticipation of their tour announcement and to celebrate the record they released during the pandemic, over the course of July, Fast Romantics have been sharing a bit of a visual history of the band by posting all of their music videos via Instagram/IGTV.

Last week, as a thank you to fans and to spark some initial excitement about the forthcoming fall tour dates, the band has re-released their pandemic album release concert that was originally filmed live at the Dakota Tavern in August 2020. The unique, one-shot concert, which was directed by Jared Raab (July Talk, Arkells) and featured special performances by Dave Monks, Sameer Cash, and Lenny Bull, is now free for all to view; uncut from its original live recording, mistakes, and all on YouTube.

A remixed version of the concert is also now available to purchase as a high-quality live concert album with 100% of the proceeds going to the Indian Residential School Survivors Society.

Hailed as an ‘Artist to Watch’ in 2017 (Google Play), Fast Romantics is comprised of Matthew Angus (vocals, guitar), Jeffrey Lewis (bass), Kirty (vocals, acoustic guitar, synth), Kevin Black (guitars), Lisa Lorenz (keyboards) and Nick McKinlay (drums). Their SOCAN award-winning single Julia was hailed by NPR as “triumphant” and CBC’s q described their LP American Love as “a revelation of a record.” The band found top 20 commercial radio successes in Canada with Why We Fight and earned multiple #1 songs on CBC music’s national chart. Winners of SOCAN’s songwriting prize, “Best Pop Group” at the Sirius XM Indies, and short-listed for Reeperbahn Festival’s Anchor Award in Germany, as well as the Prism Prize in Canada, the six-piece are based in Toronto, Ontario, and have toured nationally and internationally over a dozen times.