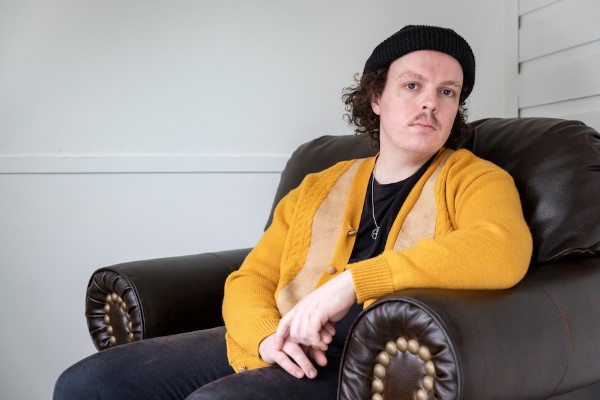 Midland, ON-based Opeongo, which is the moniker of 28-year-old singer-songwriter, Keegan Trumpour released his debut LP, Miasma in 2019, and is preparing his sophomore album, we’ll all go with (the-will-o’-the-wisp).

In advance of the release of his album, he returns with a new single, “dreadful sorry clemency”, which is reimagining the protagonist Clementine from the traditional folk tune and Elliott Smith song. The single encapsulates loss – of mercy, lenience, and forgiveness. We can survive a lack of empathy and understanding with a little bit of warmth, compassion, and care for one another.

Check out the track below, and find out more about Opeongo via our Five Questions With segment.

Hello, hi, g’day. My name is Keegan. I was born and raised in Midland, Ontario, and perform under the moniker Opeongo. I currently reside in Toronto, where I also cook in a really great restaurant.

This is always a tough one for me as I’d rather the songs speak for themselves and let folks decide what my music and style is to them. I always just say singer/songwriter as my genre as that’s about as broad as it can get. Lately, in terms of writing style, I’ve been trying to shift the narrative a lot more out of the realms of my own immediate perspective and write from another’s world. Oftentimes, real or not, they end up being a heck of a lot more interesting than I am.

In the onset of the pandemic, I skipped the city and went back to my hometown. Though I was only back for just shy of two months. I then returned home this January to deal with the loss of my best friend. Suffice to say, I had a lot of free time, more than I would have liked, and a heck of a lot of emotions to confront, more than I would have liked as well. It made for a lot of writing and I’m truly grateful that I, if nothing else, have this outlet of expressionism to make sense of things and hopefully relate to and reach others in doing so.

I think the song I’m proudest of is on this upcoming record “we’ll all go with (the-will-o’-the-wisp”, and it’s called “maybe maybellene”. It was written for my aforementioned best friend, in his lifetime, and he said it helped him a lot for a good while. Nothing can mean more to me than that, and I’m excited to share it with you all soon.

Oh, where to begin. Canada is full of such immense talent that it’s intimidating for a relative newcomer like me. I’m gonna miss a whole lot of folks and kick myself for it, but I have to mention the holy trinity of Neil Young, Joni Mitchell, and Leonard Cohen right off the hop. Buffy Sainte-Marie deserves mention when discussing Canadian music. Andy Shauf can’t write a bad song. Ada Lea is putting out an album in September that’s sure to be a classic based on the two singles. Aaron Goldstein. Daniel Romano. Carleigh Aikins. Timber Timbre. John K. Samson. And last but not least, my dear friends Ian Badger, Nathaniel Marchand, Keegan Powell, Michael Hansford, all holding it down in their respective cities. Thank you for the questions and for your undying love and support of Canadian music! All the best.