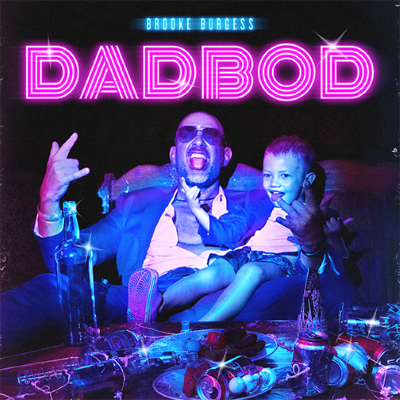 Award-winning Canadian creator, Brooke Burgess has released his double-single, “DADBOD” and “Best Friend”, as well as the titular double-album DADBOD.

After 25 years in the entertainment industry writing, directing, and producing video games, animations, interactive narratives, and audio projects (see: Electronic Arts, Broken Saints, The Cat’s Maw, and Buddha and the S**t — plus a win at the Sundance Film Festival), DADBOD lands as more than just a mid-life singer/songwriter flex.

No, this is the legend of an incredible boy, the man who was transformed by his love, and the kind of bond that comes around once-in-a-(thousand)-lifetimes.

“Oh,” Burgess adds. “And dinosaurs. My super-Buddha schools me spiritually, but he’s also part dinosaur. T-Rex, we think. Hence one of the tracks.”

Beyond being a labour of love, DADBOD was also a product of unexpected circumstances — aka COVID-19; while stuck in Southeast Asia during the peak of the pandemic, Burgess wrote, produced, shot, edited, recorded, and mixed most of this epic, endearing and ultimate ode to fatherhood.

A wild ride with promises of a little bit of pop, funk, rock, hip-hop, and folk, this genre-spanning behemoth also features a plethora of music videos to coincide with the release: 20 original tracks, 20 killer videos — “all for him.”

His son, Raimi, that is.

Triumphant, while humble at their roots, lyrical lines like ‘To put your hand in mine, I will bear the weight because you are my best mate: You’re great’ and ‘From your sense of style, to your guts and your guile to the blinding light from that million-dolla’ smile — #1 fan ’til the day I die’ tug at the heartstrings start to finish.

Considered a fun and funky summer anthem on fatherhood, “Best Friend” features thick beats, heartfelt crooning, and a brass and Hammond hip-hop climax “that’ll stir any soul in earshot.” The punk-rock-chic title track is almost a confession about family life and what happens to a father’s body when it transforms over the years into *gasp* — a “DADBOD.”

“It killed two bucket-list birds with one stone,” Burgess shares of the sweet, raucous, inspiring, family-friendly and transformative tale that is DADBOD. “One, make an epic cross-genre music and video project. And, far more importantly, two, become a Dad — underlined, and with a capital D.

“And with 20 awesome videos — and more than a few surprises — the love was clearly made to be shared. It’s father meets son, father loves son, father freestyles increasingly hip tunes to son, father records sweet birthday versions and videos for son…

“You know,” he confesses, “until father is humming and drumming lines into Garageband, and cashing in every last favour from musicians around the world, all to make an insane double album for son…”

Check out the video for “Best Friend” below, and find out more about Brooke via our mini-interview.

Thanks for the opportunity – that’s some classic Nova Scotia hospitality! 🙂

Well, I’m Brooke Burgess — a fellow east coaster by birth, and a ‘veteran’ of the Canadian entertainment industry. I’ve had several decades in the trenches writing, directing, and producing for videogames, animation, interactive narrative, and audio projects: Electronic Arts, Broken Saints, The Cat’s Maw, Buddha and the S**t, to name a few. Before the start of 2020, I was doing the ‘digital nomad’ thing across Europe and Southeast Asia while consulting on a bunch of gaming, mobile, and narrative projects. But more importantly? I was learning how to be a dad! Flesh of my flesh, blood of my blood! And that’s where our story begins…around the time the world went mad.

There we were — a clueless Canuck papa-in-training and his badass little super-Buddha — locked down on a secret island base in southern Thailand. I had to do something creative or risk losing my few remaining marbles. So, whilst friends and strangers alike baked quarantine sourdough or caught virtual fish in Animal Crossing, I decided to take a real shot at killing two bucket-list dreams with one stone:  1) make a sprawling multi-genre music and video project with the help of lifelong friends around the world AND 2) spend every spare second with my incredible boy by making the project about HIM!

Tell us about the recording process behind “Best Friend”?

Oh man, it was a trip in almost every sense of the word!  Best Friend was conceived quite early in the monstrous 20-song lineup for DADBOD, but it didn’t really take shape ’til near the end. Whereas most of the songs on the album are fun rock/punk, old-school hip-hop nods, or indie-folk heartwarmers IE: easier to compose and shape in production, Best Friend was different. I very much wanted a pop sound, but also to infuse it with a timelessness in arrangement and style. With my longtime collaborator (Canadian musician/composer Tobias Tinker), we went back and forth online for months building the tone and arc and layers with care. And then we’d pull out our remaining hair on Zoom, trash everything, and try again…

Remote songwriting and jamming ain’t easy on the best of days, let alone during peak pandemic with sketchy wifi, him based in Berlin, and me humming lines and finger-drumming beats from a bamboo bungalow. But somehow we made it work. I kept going back to some of the first tunes that got my young son dancing the second he heard them, like Stevie Wonder’s Superstition, and Canuck summer anthem LEN’s Steal My Sunshine. We took the fun and funky essence of those songs built a head-bobbing bass and drum sound, and then layered in super cool organ, brass stabs, and sultry vamping from old pal and BC’s own Chrystal Leigh (SONS of DAUGHTERS).

We’d all record our parts separately, often with me directing live from the bamboo HQ, and then I’d do a rough mix on headphones as my son snoozed beside me. Then I’d bounce that mix to Berlin where Tobias would build on it, and we’d repeat that cycle until we didn’t totally hate it. Which felt like forever, since I was writing and RE-writing lyrics and recording and RE-recording vocals ’til just days before the video shoot!

Even with the corona craziness, I can see now that 2020 was chock full of blessings for me. And when I really think about it, the highlight had to be an incredible stay before year’s end on a famous peninsula in southern Thailand. It’s a breathtaking sliver of bleached sand and azure sea and limestone towers that’s normally packed with sweat-and-beer-soaked tourists of the worst persuasion. But this time it was empty! I had three life-changing days laughing and frolicking and swimming and exploring with my boy, and the trip ended up inspiring one of the best rock songs on the album. So yeah…that’s a clear winner.

Doing a visa run to Yangon in Myanmar last Feb during the first pandemic warnings was a close second in the highlight department. Wide-eyed locals and dazed tourists didn’t need to say a word to each other — somehow, we all knew the world was about to change.

Well, I’m currently helping a cool wellness tech firm in the Netherlands with their narrative plans, so the ‘corporate’ side of the game is covered. But when it comes to this mid-life singer/songwriter flex known as DADBOD? My goals are to keep releasing monthly music videos deep into next year, land a solid feature on CBC/BBC/NPR, sell enough downloads on Bandcamp to make a limited edition vinyl ( https://brookeburgess.bandcamp.com ), get heaps of new fans and followers of all ages across social/Spotify, and book at least one live show in a historic theatre venue where we can go nuts with the presentation and stream it live thru the fine Canucks @ Sidedoor.

Believe it or not…I’d totally be down to write some songs with JOJI. I really respect his understanding of the audience, his low-key intelligence and self-awareness, and his playful yet melancholic authenticity. I think we could craft something really cool together.

As for closing a show…well, I’d honestly die happy if I could do Grace, Too with the Hip lads on a GD tribute show. Infinite respect.